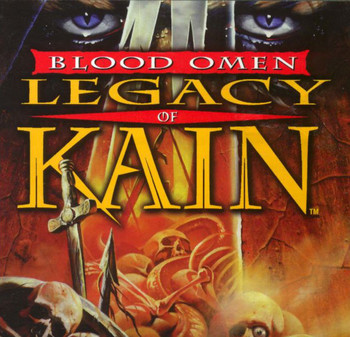 "Nothing is free. Not even revenge."
"There is a magical operation of maximum importance: the initiation of a new Aeon. When it becomes necessary to utter a word, the whole planet must be bathed in blood..."
— Aleister Crowley
Advertisement:

The first game in the Legacy of Kain series, developed by Silicon Knights, published by Crystal Dynamics, and released for the PlayStation in 1996. A Windows port followed a year later. The PlayStation version was added to the PlayStation 3's digital storefront as a PSOne Classic in late 2011, and the Windows version was uploaded to GOG.com in September 2021.

The player controls Kain, an nobleman who is ambushed and killed by a band of assassins. With his death, Kain's soul is sent to the Underworld, but here he is contacted by the ancient wizard, Mortanius the Necromancer, who offers Kain the chance to come back to life to exact revenge upon his killers. Kain accepts Mortanius' bargain and finds himself newly resurrected as a vampire. Trying to track down his murderers and a cure to his vampiric curse, Kain is tasked with traversing the fictional land of Nosgoth and slaughtering the Circle of Nine, a corrupt oligarchy of godlike sorcerers, but slowly begins to forsake his humanity and view his transformation as a blessing.

Blood Omen is a top-down adventure game more in-line with the classic The Legend of Zelda games but with a twist, here the player mostly uses a combination of magics and transformations — rather than items — to explore world while also trying to avoid water, rain and snow as much as possible due to vampires being weak to them and also having drain human blood from bandits and hapless peasants to refill your slowly-draining health bar.

The developers took pride in the game being Bloodier and Gorier than your typical Fantasy Adventure game and having players control a Nominal Hero that reveled in the suffering he inflicted on others while tackling themes about human nature, good-intentioned people doing morally dubious things to archieve their goals and the corruption power brings to a person, all through very well voice-acted Shakespearean dialogue.