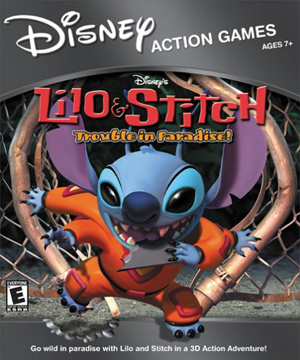 Experiment 626 is about to kweesta you and eat this game's cover! And no, unlike the previous game's box art, he's NOT doing it to show you that it features real movie clips!
Disney's Lilo & Stitch: Trouble in Paradise is a Crash Bandicoot-style 3D Platform Game developed by Blitz Games for PlayStation and Windows that first released on June 14, 2002. The PlayStation version, published by Sony Computer Entertainment, is simply titled Disney's Lilo & Stitch for the American release, dropping the subtitle.
Advertisement:

The game is a somewhat modified retelling of the original Lilo & Stitch film where the titular duo must traverse around Kauaʻi while avoiding enemies and obstacles. One notable thing about this game is Lilo having the ability to use voodoo powers to attack enemies for some reason. Despite receiving very mixed reception on its initial release, the game was re-released as a PS one Classic in Europe on November 26, 2009, and March 8, 2011 in North America.

Tropes relating to the game include: