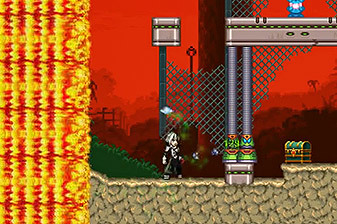 Charlotte: Huh?! Something's after us!
Jonathan: This doesn't look good! Let's run for now!
— Running from the Behemoth in Castlevania: Portrait of Ruin
Advertisement:

A level (or segment thereof) in which the player must make rapid progress to outrun a giant threat. The threat in question can be anything from rising water levels, to giant robots, or, as the name implies, a slowly advancing giant wall lined with all manner of painful things. Other times, there isn't even a visible threat, and the screen simply scrolls on its own. Sometimes going off the screen or contacting the said wall means instant death, at other times, it simply pushes the player forward, over a cliff, or just squishing them to death if necessary.

See also: Rise to the Challenge, The Walls Are Closing In, Descending Ceiling, Indy Escape, Advancing Boss of Doom and Outrun the Fireball for specific types of this. When the screen itself forces you to keep moving and anchors the camera to the wall, it's a Auto-Scrolling Level. Also compare Escape Sequence and Deadly Walls. May be justified with Living Structure Monster or an advancing Animal Stampede.