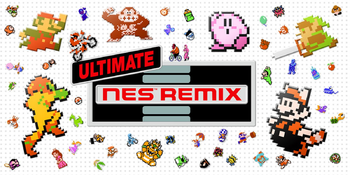 is a Minigame Game released for the Wii U on December 18th, 2013. It features NES games such as the original Super Mario Bros, but challenges players to complete specific tasks in a way similar to Nintendo World Championships or 9-volt's stages of WarioWare. The "remix" stages take it a bit further by also inducing an Interface Screw, or actually changing the behavior or look of the game itself; in other words, ROM hacks made commercially by Nintendo themselves.
Advertisement:

The game features Miiverse support and has a collection of stamps earned by getting "bits". The Wii U controller's screen always shares the TV display in this game.

A sequel, NES Remix 2, was released on April 25, 2014, featuring another set of NES titles. Features in the follow-up include (an asterisk indicates it's also present in Ultimate NES Remix for Nintendo 3DS:)

A pair of compilation re-releases, NES Remix Pack for Wii U and Ultimate NES Remix for the Nintendo 3DS, release in late 2014. Pack contains NES Remix 1 and 2 and Ultimate only has the best challenges and features from the two NES Remix games, as well as a brand new remixed version of Super Mario Bros called Speed Mario Bros., in which the game is twice as fast. Ultimate also features improved online leaderboards.