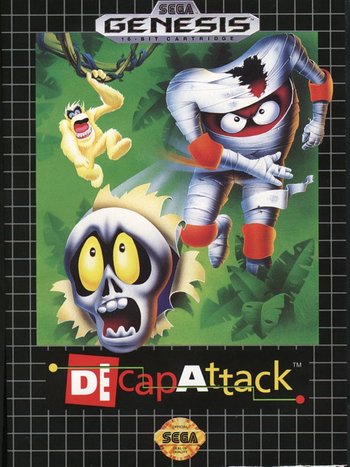 Get a-head in life and death!
Advertisement:

Decap Attack was a weird Platform Game developed by Vic Tokai and published by Sega for Sega Genesis/Mega Drive in 1991, and probably the only game in existence which starred a headless mummy. However, it began its life as a totally unrelated Japanese game called Magical Hat Flying Turbo Adventure, based upon the anime Magical Hat. When it arrived at the USA and Europe, it became a wacky monster adventure set in an island shaped like a skeleton body.

The story is, as always, pretty simple: the demon Max D. Cap emerges from the underworld and breaks Body Island into seven parts. Mad Scientist Frank N. Stein creates a headless mummy named Chuck D. Head for the sole purpose of trying to defeat Max and rescue the island.

Decap Attack was adapted into a long-running comic strip in British magazine Sonic the Comic, which brought the zaniness of the game up to eleven.