Recap / Star Trek: The Next Generation S6E16 "Starship Mine" 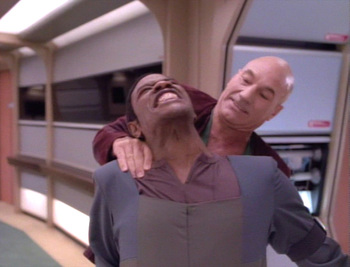 Interestingly, it won't be long before Tim Russ is dishing out the neck-pinches instead of taking them.
Advertisement:

It's routine maintenance time for the Enterprise: they've pulled into the Remmler Array in orbit around the planet Arkaria for a baryon sweep. Prolonged periods of warp speed travel can cause exotic particles to build up in a starship's hull, and a full radiation sweep is necessary now and then to get rid of these particles. Since the plasma field that sweeps the radiation is lethal to living beings, the Enterprise needs to be vacant for the duration of the procedure.

So everyone is busy getting ready to go, and everyone needs something from Captain Picard. Doctor Crusher needs containment space aboard the station to preserve some of her organic samples. LaForge needs some additional shielding around the computer core to protect the ship's memory. Worf needs the command codes to set a timer that will power down the ship once everyone has disembarked. Data confuses Picard with his latest attempt to emulate human behavior by making small talk. And nobody wants to go to Commander Hutchinson's reception down at the local Starfleet base, since the man's reputation for boringness precedes him. Picard manages to solve almost everyone's problems; only Worf gets to bow out of the reception because he asked first. All that done, Picard - as the Captain, he's the last to leave the ship - permits himself one loving gaze around the empty bridge, before the maintenance crew setting up the computer shielding barge in and get to work.

Down on Arkaria, Hutchinson's reception proves to be just as dull as everyone feared, as the senior staff of the Enterprise vigorously pass the Commander off to each other in a desperate attempt to get away from his incessant chatting. The only real bright spot to be found is Data, who, taking Picard's sarcastic advice literally, has been observing Hutchinson for pointers on how to make his small talk seem more natural. He starts imitating Hutch's mannerisms. Even Picard finds he can't take much more of this, and when Hutchinson mentions Arkaria's scenic horseriding trails, he sees his opportunity to escape. After all, he loves horseback riding. All he needs to do is slip back to the Enterprise for his saddle. He should have plenty of time before the system shutdown timer hits zero.

Once back aboard the Enterprise, having fetched his saddle and changed into something more riding-appropriate, Picard prepares to beam back down, when he notices something. There's an open panel in the corridor, and some of the wires have been cut. Picard has little chance to puzzle over this, as a maintenance crew member confronts him. Picard notices the man tensely brandishing a torch and tries to walk away, but when the man tries to call him back, Picard attacks. He disables the man with a Vulcan Neck Pinch and makes a break for it, narrowly avoiding an encounter with some other "maintenance crew members" having a suspicious conversation. He gets to the transporter just in time... for the system shutdown to kick in.

Meanwhile, back on Arkaria, Data has cornered the Arkarian station administrator Orton and is small-talking him to within an inch of his life. Riker senses an opportunity and passes Hutch to Data, and the two of them go off together. Wow, problem solved.

On the Enterprise, Picard drags his attacker (whose name is later established to be Devore) to Sickbay, wakes him up, and demands some answers. He doesn't get them, so Picard just tranquilizes him instead, and then he hears voices. Devore is wearing a communicator. A woman named Kelsey is asking him to report in, and when he doesn't respond, she sends someone named Kiros to go check on him. Picard takes the communicator with him and attempts to figure out what's going on. He doesn't get far, unfortunately, before he runs into Kiros: an Arkarian woman with a laser pistol, who takes him into custody.

On Arkaria, the crew watch with fascination as Hutch and Data appear to be trapped in some sort of loop: they've been talking for a very long time about nothing at all and show no signs of stopping. And then Geordi notices some very strange heat signatures coming from under the buffet table. Orton comes up to him and immediately tries to pull him away, which in turn draws Riker over to them to ask if anything's wrong. All hell promptly breaks loose: the heat Geordi was detecting was from some hidden disruptor rifles, which Orton and a colleague immediately pull and fire. Hutchinson is killed, LaForge is wounded, and everyone else is taken hostage.

Meanwhile, Picard is taken to Main Engineering and introduced to Kelsey, the leader of a small gang of unsavory types who are doing something to the warp core. Picard identifies himself as Mott, the ship's barber, and he's put under guard until they can figure out what to do with him. On Arkaria, Crusher has gotten LaForge stabilized and the rest of the crew are assessing the situation. Troi senses that Orton is extremely nervous; Geordi's discovery of the hidden weapons screwed up whatever his plan originally was, and now he's working without a net. There might be a way that they can take advantage of that, if they're very careful.

By now, Picard has figured out what Kelsey's gang is up to: they're harvesting trilithium resin from the warp core, trilithium resin being a highly volatile (and easily weaponizable) substance. Using the laser welder he lifted from Devore, Picard causes an engine overheat to make the ship's fire suppressant systems kick in. In the chaos that follows, Picard destroys the portable force-field generator that they were using to keep themselves safe from the baryon sweep, then he makes a break for it. One of Kelsey's men, Satler, follows him, but Picard leads him smack into the approaching radiation, then heads to Worf's quarters to get his hands on some weaponry.

Thanks to the communicator he took from Devore, Picard learns of Kelsey's plans. Since the field diverter is now useless, and the sweep is coming, they have to move. She orders Neil, her tech guy, to improvise a stabilizer for the trilithium container so it can be safely transported by foot, and then they'll head to Ten Forward, the last place the sweep will touch. Picard breaks into the conversation, warning Kelsey that the trilithium is much too unstable to move with some jury-rigged safety measure and advises her to cut her losses. Kelsey's not about to back down, however, and since Picard accidentally left his combadge behind, she knows he's not just a barber. She sends her goons Kiros and Pomet to find Picard and lights a fire under Neil to get that stabilizer done.

Back on Arkaria, the crew has devised a plan. Thanks to Riker distracting Orton at a convenient time, they can modify Geordi's VISOR to emit a high-frequency audio pulse, which will knock out everyone in the room except Data. And then they notice that Orton's consulting a nearby communications console: a ship is approaching. Possibly his getaway vehicle. Riker gives Data his orders: once they activate the pulse, take control of the situation and stop that ship.

Meanwhile on the Enterprise, the game of cat-and-mouse continues. Neil and Kelsey make their way to Ten Forward, with Picard doing everything he can to slow them down, including cutting the rungs out of a few crucial Jeffries Tubes forcing them to take a roundabout route. And Pomet and Kiros continue to hunt Picard. Picard manages to take out Pomet with a knock-out dart, but Kiros gets the drop on him. Once Kiros informs Kelsey of the situation, she orders her to bring Picard to Ten Forward with them. And then, once Neil lets her know what she needs to do to drain the trilithium from the container, she kills him. Poor dope.

On Arkaria, the crew's plan goes off without a hitch. Data disarms the unconscious Orton and takes over the console. On the Enterprise, Picard is brought before Kelsey, and he tries one last time to negotiate with her. Revealing his true identity as Jean-Luc Picard, he offers himself as a hostage in exchange for the explosive. But Kelsey's not interested. She's not a terrorist, it turns out. She's a thief and plans to sell the resin for a massive profit. The three of them walk into Ten Forward, right into Picard's last booby trap.

Kiros is taken out immediately by an explosion, and Picard and Kelsey end up grappling over the trilithium container. Meanwhile, the baryon sweep comes ever closer. Kelsey manages to fight her way free with the container, and beams out to the nearby getaway ship. Picard is able to contact Arkaria Base Command (which is Data at this point), and gets the baryon sweep shut off before it kills him. Then he reveals that, in the struggle, he managed to get hold of the safety valve for the trilithium container.

In the end, all is well: the Enterprise is safe, the bad guys are defeated...and Worf manages to find Picard's saddle.

Tropes featured in "Starship Mine" Include: