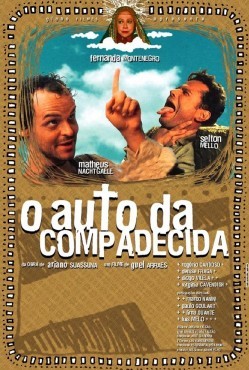 O Auto da Compadecida or known among English viewers as A Dog's Will is a Brazilian movie (originally released as a four part miniseries in 1999 before a version cut down to feature length hit theaters in 2000) and regarded as one of the country's greatest classics, based on a play of the same name by Ariano Suassuna. The story takes place the impoverished, dry deserted region of Northeast Brazil and follows two friends trying to get by using their wits and silver tongue: the lively Jack (João Grilo, played by Matheus Nachtergaele) and the cowardly Chicó (played by Selton Mello). The two men work as assistants to the local baker and get wrapped up in several misadventures including tricking a priest to deliver the last rites to a dog as part of its will, trying to marry a landowner's daughter or risk loosing a lump of flesh as the price and an fatal encounter with a bloodthirsty bandit lands the main characters on a trial by the Devil, Jesus and the Virgin Mary.

The movie is ostensibly a comedy, playing on several archetypes from the Brazilian Northeast region and also has some supernatural elements.