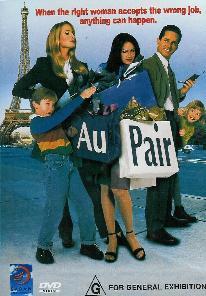 Au Pair is a 1999 television film produced by Saban Entertainment and originally released by Fox Family starring Gregory Harrison and Heidi Noelle Lenhart, Haim Saban's step-daughter. Jennifer Morgan (Heidi Noelle Lenhart) is an MBA looking for a job as an executive at Oliver Caldwell's (Gregory Harrison) company. Through a series of errors, she is given a job as the au pair for his children, Katie (Katie Volding) and Alex (Jake Dinwiddie). While the children initially play pranks on Jennifer, and try to drive her off, they come to prefer her over Oliver's fiancee, Vivian (Jane Sibbett), and they begin to scheme to get Jennifer and Oliver together.

The film garnered two sequels, Au Pair II in 2001 and Au Pair 3: Adventure in Paradise in 2009, which was released as an ABC Family Original Movie.