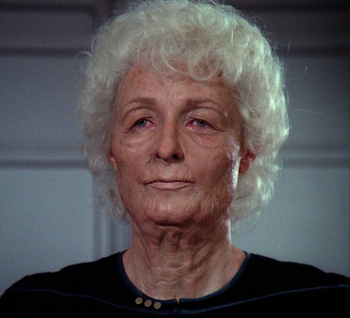 The scary thing about this aging makeup is that this isn't too far off from how Diana Muldaur actually looks like nowadays.
Advertisement:

Captain Picard calls in Counsellor Troi to request her assessment of Dr. Pulaski. She tells him that Pulaski is almost too dedicated to her work as a doctor. But their conversation is interrupted by a garbled distress call. The call is traced to the supply ship USS Lantree, where the entire crew is found dead, having inexplicably undergone rapid aging after leaving the Darwin Genetic Research Station a few days prior. The Lantree is quarantined as the Enterprise heads for the station to investigate.

Darwin Station is found to be suffering from the exact same phenomenon, and the lead scientists insist that their subjects, genetically engineered children, need to be protected from it. Picard isn’t willing to risk sending anyone into the station and grows increasingly frustrated by Pulaski's bull-headed approach to her job, but she eventually convinces him to beam onboard a child completely sealed in space-plastic for her to examine. Even though the initial examination reveals nothing dangerous, Picard refuses to allow the child to be freed onboard the ship unless there is absolutely no risk to the crew. Pulaski eventually proposes examining him in a shuttlecraft, and to her surprise, Picard agrees. She brings Data along for the examination, but mere minutes after she releases the boy from his plastic cage, she finds herself suffering the first symptoms of the mysterious ailment.

Since it doesn’t matter anymore if she breaks quarantine, Pulaski heads to Darwin Station and talks to the doctors about their experiments. It turns out they’re biologically engineering superhuman children with psychic powers and an aggressive resistance to disease. Overly aggressive, to the point that their immune system seeks out disease even before it reaches the children, including in the bodies of anyone nearby. Data does some quick research and puts together that it’s that very immune response that is causing the rapid aging in the people around them. He deems the process irreversible, and Pulaski sends word to the Enterprise that she will remain in quarantine in the station.

Picard refuses to accept defeat and has Transporter Chief O’Brien (who is now a character) come up with some Technobabble that will undo the effects by using the transporter to screen out the changes to her DNA. It's a mad race to find a sample of Pulaski's DNA, which is complicated by the fact that she never uses transporters, and therefore there is no log of her DNA on record. Picard contacts her previous captain to see if he has her info. The captain can't help, but does reveal that Pulaski was a huge fan of Picard's and jumped at the chance to serve with him. The crew eventually use a strand of her hair to get a DNA sample, and the process works. The scientists at the station are able to follow this example to save themselves. But there is no saving the Lantree, and Enterprise is forced to destroy the entire ship, as the bridge crew stands to honor its crew.