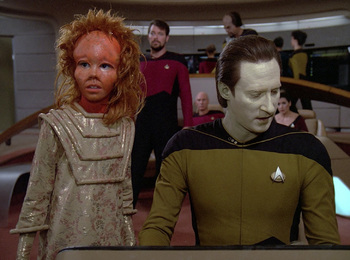 Awww, how can anyone say no to a face like that?
Advertisement:

Picard is getting ready to take a ride on an Arabian horse in the holodeck when Riker summons him to the bridge. A local cluster of planets have all been exploding for some unknown reason. Riker suggests that a team of scientists investigate the cause, with Wesley in charge to give him some command experience in a low-stakes assignment.

The stakes get higher when Data answers a distress call from Sarjenka, a little girl on one of the planets that is about to explode. The problem is that Sarjenka's civilization is a pre-warp society, so the Prime Directive mandates that the Enterprise practice a policy of non-interference. When Data finally admits his actions to Picard, the bridge crew debate whether they should help save the girl.

Meanwhile, Wesley is struggling to take charge of his team of scientists. They are all older and more experienced than him, so when they question his orders, he doubts himself. After a few pep talks from Riker, Wesley takes inspiration from Picard's command style of conferring with his subordinates, making a decision, and living with the consequences. He orders his scientists to make a thorough but potentially wasteful survey of the planet. They eventually come up with a solution to the planet's tectonic problems.

Picard is reluctantly convinced to allow Data to beam down to Sarjenka and bring her back aboard the ship. She watches as the ship enacts Wesley's proposal to save the planet, and it works. Sarjenka thanks Data for her help and wistfully wishes that she could stay with him on his ship, but she knows that's not possible. Before she leaves, Picard orders that all memory of Data and the ship be wiped from her memory to preserve some semblance of the Prime Directive. Data leaves Sarjenka behind with a keepsake that she will no longer understand and must be comforted by the fact that he will remember their time together.