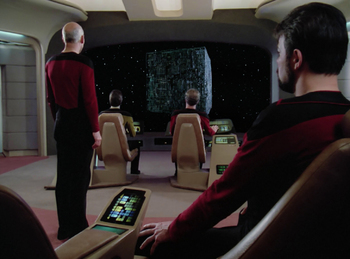 In which the Enterprise reaches levels of "WE'RE DEAD" previously thought impossible.
Advertisement:

Overeager young Ensign Sonya Gomez, a recent Academy graduate just assigned to the Enterprise, is carrying on a rambling conversation with Lt. La Forge in Engineering. When La Forge tells her that she ought to take her mug of hot chocolate away from the delicate machinery, Gomez turns around and spills all over Captain Picard himself, mortifying her.

On his way to change his uniform, Picard exits a turbolift without looking and finds himself aboard a shuttlecraft piloted by Q. Picard angrily reminds Q of his promise after their last encounter to never trouble the Enterprise again, and Q says he always keeps his word: The shuttlecraft is in the middle of nowhere. Picard tries to wait Q out, but Q has all the time in the universe, so Picard relents and agrees to hear his proposal.

Meanwhile, La Forge is in Ten-Forward trying to give Gomez a pep talk to ease her nerves. He notices that Guinan seems disturbed. She admits that she's been having a very dire premonition but can't put her finger on it. La Forge and Gomez return to Engineering to see if anything is amiss.

Q and Picard teleport to Ten-Forward, where Q immediately reacts with shock that Guinan is aboard. The pair have a history, and they square off, but Picard talks them down as Riker and Worf arrive. Q admits that he's been kicked out of the Q collective. He's bored and wants to join the crew of the Enterprise. Picard balks at the idea, but Q warns him that the Federation has no idea what lies in store for them. Picard confidently states that the Federation can handle any issues that may arise without Q.

Q decides to put that boast to the test. With a snap, he propels the ship 7,000 light years away, into an unknown part of space. They're 2.5 years away from the nearest starbase at maximum warp! Guinan recognizes this part of space and warns Picard to get the hell outta there. But Picard decides to go exploring first, and they come across an uninhabited M-class planet with great rends in the surface where the cities once were. It's exactly what happened to the outposts in the Neutral Zone in the Season 1 finale.

Suddenly the Enterprise is confronted with a completely new ship: a giant cube of metal, oddly genericized in its design. There's no bridge, engineering section, living quarters, or even life signs. Guinan identifies the ship as the source of her concern: the Borg. They nearly wiped her people out a few centuries ago, and they'll do it to the Federation if given the chance. Indeed, Borg scouts soon appear in Engineering and examine the Enterprise's technology before beaming away. The Borg ship announces that the Enterprise has no hope of winning a fight.

The Borg ship begins tractoring the Enterprise in. Picard orders a volley with everything they've got, targeting the tractor beam. The Borg slice a chunk out of the Enterprise, killing 18 crew, but its transport beam gets destroyed. In a conference, Q warns Picard that the Borg are an existential threat to the Federation itself, interesting in nothing beyond consuming their technology.

Picard decides to send an away team into the Borg ship. Troi has sensed that they are a collective Hive Mind, and the away team confirms this. Each individual Borg behaves like an automaton when not plugged directly into the ship, ignoring the away team. After discovering a nursery where newborn children are augmented with Borg implants, the team realize that the Borg are rapidly repairing their ship. The away team beams away, and Picard orders a full retreat.

But the Borg follow hot on their heels. Picard orders another salvo, but the battle is entirely lopsided this time, and the Enterprise quickly finds itself at the Borg's mercy. Riker prepares to give the order to fire a photon torpedo at close range, likely annihilating the Enterprise. Q appears just in time to remind Picard of his claim that he could handle any threat.

Picard decides that he Ain't Too Proud to Beg and asks Q for help. Satisfied, Q snaps his fingers and whisks the ship back to where they started. Q congratulates Picard for his humility in learning Q's lesson, but Picard is still defiant about Q's methods and blames him for the 18 deaths in his crew. Later, Guinan warns Picard that the Borg have now become aware of the Federation and will soon be knocking on their door. Picard grimly states that the Federation at least now know what they have to prepare for.