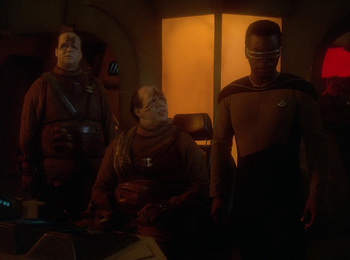 Anybody who's worked in tech support will sympathize with Geordi.
Advertisement:

The Enterprise is about to study a new pulsar cluster, but first it has to drop Wesley off at Starbase 515 to take a Starfleet exam. Meanwhile, Dr. Pulaski urges Picard to have an operation that he's been neglecting, but he doesn't want it performed on the ship for fear that his invincible aura among the crew will be shattered. In spite of his desire to see the pulsars, he decides to accompany Wesley to the starbase and have the operation off-ship. The pair board a shuttlecraft and settle in for a 13-hour flight at impulse power.

As the Enterprise heads on without them, they receive a distress signal from a stranded ship. The ship is full of Pakleds, an apparently dim-witted species who have no idea how their own technology works. Although Worf is leery of the situation, Riker decides to beam Geordi over to their ship to make their repairs for them. Just after he leaves, Troi bursts onto the bridge warning Riker that the Pakleds are not as harmless as they seem. When Geordi finishes his repairs, the Pakleds are impressed by his intelligence and take him hostage.

As this is happening, Picard and Wesley are stuck together in a small space and share an awkward conversation. Picard admits that he has an artificial heart that needs to be swapped out. Wesley bombards Picard with questions about his life choices, and Picard relates how he was once a brash, impetuous and ambitious young officer, which is to blame for his medical condition. He once picked a fight with a trio of Nausicaans and got impaled through the heart. We'll actually get to see this in "Tapestry." Wesley is astounded by the story, and the pair become more friendly.

Back on the Enterprise, Riker starts to realize that the Pakleds were never as stupid or helpless as they seemed. Their ship was specifically designed to look damaged. The Pakleds are, in fact, greedy opportunists who will do anything to acquire new technology and power before their culture is ready for it. The Pakleds replicate Geordi's phaser and stun him repeatedly, demanding the entire contents of the Enterprise's computer in exchange for his return. While he's around, they force him to make improvements to their weapon systems so that they will be "strong." Unable to comply with such a breach of Federation security, the bridge staff pass a coded message to Geordi, hoping that he'll pick up the clues and be ready to spring a trap of his own on the Pakleds.

Meanwhile, Picard and Wesley arrive at Starbase 515. Picard's operation starts to go unexpectedly sideways, and the surgeon states that unless they get a specialist involved, Picard will die. The Enterprise receives word that Picard is on the brink of death, and they are needed at the starbase. But first, Riker and Geordi need to spring their trap. Riker announces that he's going to destroy the Pakled ship with Geordi aboard. Geordi assures the Pakleds that he's on their side now and delivers a stream of Techno Babble to justify some new adjustments that he's making to their weapon systems. The Enterprise showers the Pakleds with harmless hydrogen exhaust, and Geordi exclaims that the "crimson force field" has deactivated the Pakleds' weapons. Deciding that they have lost, the Pakleds drop their purloined shields and allow Geordi to escape. The ship high-tails it to Starbase 515.

Picard awakens on the hospital bed fully healed and is shocked to discover that Dr. Pulaski is there, having saved his life. He realizes that the whole ship must now know of his infirmity, but the doctor assures him that no one cares. When he arrives on the bridge, he congratulates Wesley on passing his exam and announces, "Any rumors of my brush with death are greatly exaggerated." And with that, we're on to the next adventure! Unbeknownst to all, however, the Pakleds will bide their time, and eventually come back to prove that simply leaving them behind was a bit of a mistake...