Recap / Star Trek: The Next Generation S1E13 "Angel One" 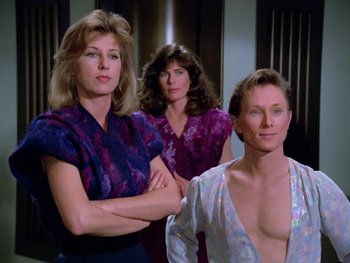 We open with the Enterprise having investigated a seven-year overdue ship, the Odin. The wreck contained no life signs, but had several missing escape pods, suggesting there are survivors. The nearest planet is Angel One, a pre-warp society that is a matriarchy. Women are larger and dominant, while the men are small and subservient. The all-male survivors of Odin have become outlaws due to their subversive behavior. The elected leader of planet, Beata, agrees to allow the Federation to find and extract them.

Picard wants to get this small issue finished with quickly so that he can rush to the neutral zone, where the Romulans have started amassing battlecruisers. Further complications arise when Wesley Crusher contracts a virus aboard the ship, and it quickly spreads to other members of the crew. Picard gets hit with flu-like symptoms and is relieved of duty by Dr. Crusher, leaving Geordi in command.

On the planet, Riker has developed quite a thing for Beata. He meets with her for a private audience wearing the traditional attire of the native men, which includes a plunging neckline that exposes almost all of his Carpet of Virility. The display proves irresistible. After some heart-to-heart conversation, Riker marks another notch in his quest to screw every female guest star on the series.

Meanwhile, the away team decides to find the missing crew by isolating something unique to them that doesn't exist on Angel One. Rather than looking for human biosigns, they look for platinum. Sure enough, they find Ramsey, the leader of the surviving freighter crew. Unfortunately, he has no intention of leaving. The crew has settled in, taken wives, and even have children. However, due to how men are treated on this planet, they're in hiding. Nevertheless, they refuse to leave.

As Ramsey and his men are not members of Starfleet bound by the Prime Directive, the away team has no power to force them to comply. The team reports back to Riker right in front of Beata, who promptly sentences Ramsey and his followers to death and easily captures them. Riker offers to take them and their families off-planet to avoid execution, but they still choose to stay even in the face of death. Meanwhile, the virus has spread to so many crew members that Dr. Crusher declares the ship quarantined, meaning Riker can't beam them away even by force.

As the scheduled execution approaches, Riker makes a last-ditch appeal to Beata, pointing out that Ramsey's men are not the cause of the revolutionary views spreading across Angel One, but merely a symbol, and executing them would make them into martyrs and worsen the situation. After some thought, Beata agrees, and sentences the Odin survivors and their families to exile on the opposite side of the planet to at least slow down the effects of their rebellious views.

Just in time, Crusher has finally figured out how the virus spreads and treats the crew. The away team beams back, and a recovering Picard orders the ship to make haste to the Neutral Zone.