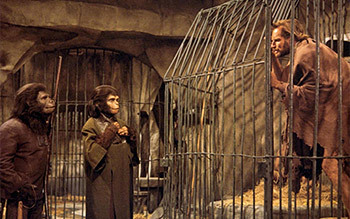 Monkey see, human screwed.
"Colored people had it rough. Imagine: You've been brainwashed into believing your blood is tainted. You've spent all your time assimilating and aspiring to whiteness. Then, just as you think you're closing in on the finish line, some fucking guy named Nelson Mandela comes along and flips the country on its head. Now the finish line is back where the starting line was, and the benchmark is black. Black is in charge. Black is beautiful. Black is powerful. For centuries colored people were told: Blacks are monkeys. Don't swing from the trees like them. Learn to walk upright like the white man. Then all of the sudden it's Planet of the Apes, and the monkeys have taken over."
— Trevor Noah, Born a Crime
Advertisement:

When most writers want to write about discrimination and oppression, they stick to real-world examples — after all, there are plenty of those. Some writers, however, wonder: "What if it were the other way around?" What if Black Africans had enslaved Europeans? What if India had colonised Britain, or the Aztecs had colonised Spain (perhaps giving rise to a Modern Mayincatec Empire)? What if women had all the power and men had to Stay in the Kitchen? And so on and so forth. There may be a semi-plausible Alternate History explanation for the switch, but just as often it simply is that way.

Often this is not just an interesting what-if, but a way of making a point, saying to the privileged group "well, how would ''you'' like it if...?" This tends to be Anvilicious, though not always in a bad way. The message may also be that power corrupts, and no matter who's on top, things will always suck for the group on the bottom, and discrimination of any kind is wrong.

On the other hand, in certain cases the barbarism of the now-powerful group can be played up too much and the whole thing can seem as though it came out of some dislike or distrust of the group in question ("Look how much worse things would be if they were in charge"). Or, alternatively, the work may be disparaging towards the now-oppressed group (which is usually an Acceptable Target due to being in power in the real world), and suggest that they deserve to be treated badly.

Compare Just the Introduction to the Opposites, Turned Against Their Masters, Black Like Me, and Color Me Black.

The Other Wiki has more information

on this concept, particularly in real life.

Believing that minorities have taken over the world, Cartman imagines what his life is going to be like.

Believing that minorities have taken over the world, Cartman imagines what his life is going to be like.