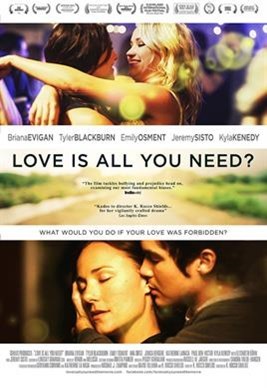 Emily: "Why do people hate us so much?"
Jude: "I guess they don't understand love like ours. Maybe they never will"
Emily: "But...Isn't our love same as theirs?"
Jude: "It is."
Emily: "Maybe someone should teach them that."

Originally, Love is all you need? was a 2012 short film by Kim Rocco Shields, detailing the life of a heterosexual theater-loving girl falling for her male classmate in the world, where heterosexuality was tabooed and prosecuted, just like homosexuality is in ours. After a period of initial obscurity the short suddenly rose to fame on YouTube, prompting Rocco Shields to make a full-length movie in 2016. The movie expands upon the story from the original short, while also adding another story of a star quarterback Jude Klein falling in love with Ryan Morris, a shy but sweet journalist with both girls facing dire consequences after others find out about their sexuality. The film also goes into more detail about the attitude towards heterosexuality than the short did: the church officials preach against it, as do officials of all levels, there are derogative slurs for heterosexuals and the bullies of all ages are more than happy to brutalize people for their 'deviant' sexuality.

The original short has an IMDB page

and can be viewed here

. The movie also has a page on the other wiki

staring Pierce Brosnan or a song by The Beatles.