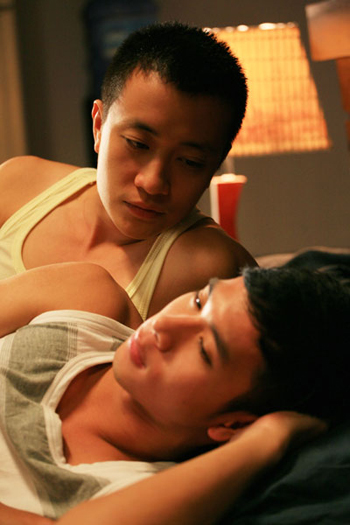 Hot Boy Nổi Loạn và Câu Chuyện Về Thằng Cười, Cô Gái Điếm Và Con Vịt (Hot Studs On The Loose and The Story Of The Guy Who Smiles, The Prostitute And The Duck), or simply Hot Boy Nổi Loạn is Vietnam's first example of a serious gay-themed movie with a progressive message. Debuting in August 2011 under the rather uninspired English title Lost In Paradise, the film managed to make waves among the conservative public and media of Vietnam thanks to its humanistic take on homosexuality and prostitution, being at once dark and humorous, as well as handling trendy and controversial topics with subtlety and production values rarely seen in current Vietnamese cinema.

As the title implies, the plot is made up of two separate story lines, both about people on the bottom rung of Saigon's gritty society. The first one is about a male prostitute who keeps two incredibly well-groomed cats, seeking to escape his abusive Bastard Boyfriend, and falling in love with a boy who is running away from his hometown after being outed against his wishes. The second is about a female sex worker befriending a mute, mentally challenged man who hatches a duck from an egg.