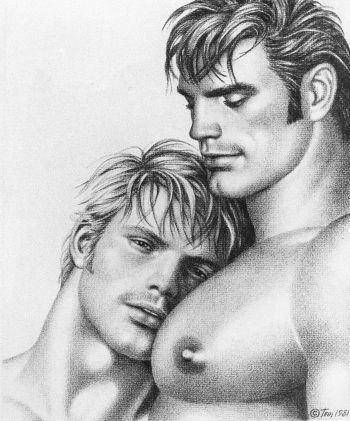 The only thing manlier than a manly man is a manly man who loves other manly men!
This is Young Guns gay. This is Top Gun gay. This is "buying the soundtrack to Top Gun just to blast 'Playing With The Boys' on repeat while you play half-naked volleyball with your buddies" gay. This is "buying the cow to tan the leather yourself" gay. This is a grunting, frowning mobius strip of "dudes pegging each other while revving impact wrenches and chainsaws all while a single woman in a cat sweater is forced to sit in the middle and cries" gay. Okay?! Do you get it?! This isn't ♫ gaaaay ♫! This is GAY.
— Bennett the Sage on the Ho Yay of Virus Buster Serge
Advertisement:

Sitting on the opposite end of the spectrum from Camp Gay, Manly Gay is when a homosexual man is shown not only in lacking Camp or feminine traits, but kept going in the opposite direction and into the realm of pure, unbridled masculinity.

A character who is Manly Gay is the complete opposite of the Camp stereotype. Typically such characters are large and strong and shown doing masculine things like sports. He may have a Carpet of Virility, he may be a badass, or he may have Stout Strength...but regardless of how he got here, the result is the same: He's manlier than your average man, straight or otherwise.

Compare and contrast with Straight Gay. The Distaff Counterpart is a Lipstick Lesbian. If the character is stereotypically Camp, then he's actually Macho Camp, a trope many Played for Laughs examples also fall into. May be The Bear, a Big Beautiful Man, a Leather Man or a Gay Cowboy. Many a Gayngster qualifies. May also be an Armored Closet Gay. See also Bara Genre, the genre where Manly Gay men have... fun with one another.