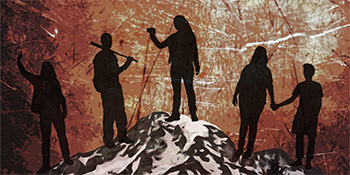 Five teenagers must survive after civilization as they know it is wiped out. Twelve years later, their story is unearthed.
"Until the end."
Advertisement:

End Times (2013-present) is a web series created by Mad Manatee Productions. After a virus wipes out most of civilization, five teenage survivors start recording their adventures on an old camcorder. Twelve years later, a bitter woman recovering from a life-changing injury finds and attempts to make sense of the videos. The series is told entirely through footage the characters record.