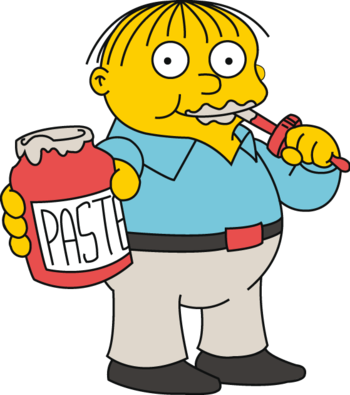 MMMM! Adhesive-y.
"It's nothing but shiny, glorious failure, and I love it like a mother loves her kid who can't stop eating paste."
— Bennett the Sage regarding the OVA of Voltage Fighter Gowcaizer
Advertisement:

Small children, the Cloudcuckoolander and The Ditz are prone to eating things that should not be eaten. Not necessarily a case of Extreme Omnivore, as it may just be this one specific non-food item that the character consumes. Most common in this category are glue, crayons, soap, bugs, and snot. If the child puts things in other facial orifices, it's a Nose Shove.

Buttercup starts a riot against a nerdy boy who does nothing but eat paste.

Buttercup starts a riot against a nerdy boy who does nothing but eat paste.