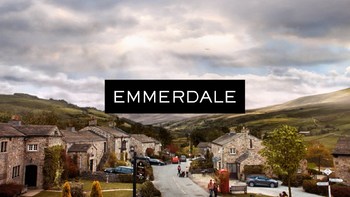 Emmerdale is a long-running British Soap Opera, set in the titular Yorkshire village.

From its creation in 1972 until 1989, it was known as Emmerdale Farmnote (a name that more than 30 years later still refuses to die out in pop culture, curiously not only among older members of the population), as the series was generally based around the farm and rural life in the village, often centring around the village pub, The Woolpack.

Notably, almost every person who moves to the village (even the illegitimate ones) either joins or is joined by their family, and so joins in the near-constant feuding among the families in the village.

Seen as something of a television version of The Archers, albeit set among bluff northern types rather than well-heeled country folk, the series received a dramatic Retool during the early 1990s. Starting with the name change, more and more classic "soap opera" elements were introduced, but the series was still in the shadow of its more illustrious rivals Coronation Street and EastEnders — until 1993, when writers had a plane crash onto the Woolpack, drawing in much controversy but also 18 million viewers.

The plane crash storyline proved so popular that Emmerdale in subsequent years has become a rather dangerous place to live. In the 20 years before the crash, 21 characters had been killed off. Since the crash, the body count currently stands at 46 — seven of them in 2006 alone.