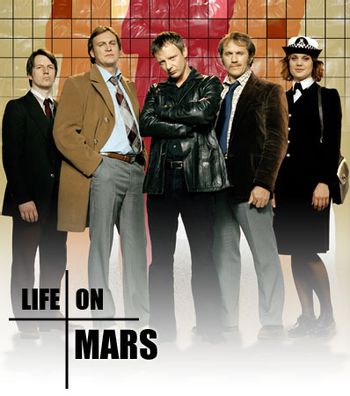 You are surrounded by Armed Bastards. L-R: DC Chris Skelton, DCI Gene Hunt, DI Sam Tyler, DS Ray Carling, WPC Annie Cartwright
"My name is Sam Tyler. I had an accident and woke up in 1973. Am I mad, in a coma, or back in time? Whatever's happened, it's like I've landed on a different planet. Now, maybe if I can work out the reason, I can get home."
— Sam Tyler, opening titles.
Advertisement:

A BBC Fish out of Water crime drama which originally aired between 2006-2007 for two seasons.

Detective Chief Inspector (DCI) Sam Tyler is an experienced, by-the-book police detective living in the year 2006. One day while investigating the disappearance of another police officer, he is hit by a car and wakes up in the year 1973. He is still a member of the police, but as a Detective Inspector (DI) under the command of DCI Gene Hunt, a boisterous, bigoted and borderline corrupt product of the times who relies on gut instinct and merciless brutality to fight crime.

Now Sam has to get used to a policing world with no DNA profiling, no computers, no Police and Criminal Evidence Act, and little respect for modern-day ethics or procedure. The most rational explanation is that he's in some kind of coma from his injury, as hallucinations from 2006 keep intruding upon the world. But Sam's 1973 is so perfectly detailed and populated, right down to details which are surely too minuscule for him to imagine, that he could have genuinely gone back in time, or be on the verge of a nervous breakdown.

It was remade into an American show, also called Life On Mars, and a Spanish show called La Chica de Ayer. A Russian remake called The Dark Side of the Moon came out in 2012, sending their protagonist back before the fall of communism in 1979, followed by a second season set in an alternate 2011 where the USSR still exists. Inspired Czech sort-of remake Svět pod hlavou note World Under the Head with a set up similar to the Russian one. A South Korean version aired in 2018. Reportedly, a Chinese version set in the 1990s is in the works as of 2019.

Life on Mars was followed by Ashes To Ashes (2008-10), which shared some of the cast. Although the first two series of Ashes to Ashes were largely standalone stories, the third featured numerous connections to Life on Mars, and finally explained the truth about what was happening all along, with the creators describing it as "the fifth series of Life on Mars". This means that even if you've watched the Life on Mars finale, this page still contains spoilers.

In April 2020, it was announced that a third series going under the temporary subtitle "The Final Chapter" would be forthcoming. According to comments given during a watch-along by series co-creator Matthew Graham

, the series will comprise of "four or five episodes" and will be set both in London and Manchester, "partially in the 70's, partially in the 80's, and mostly in an alternate NOW" with the goal to get a complete reunion of all cast members across both series'. As of now, the series still seems to be in the writing phase, with John Simm in talks to return to the franchise.