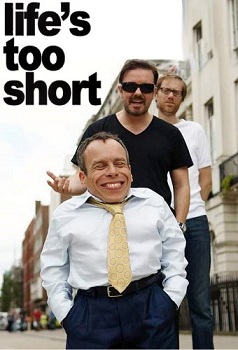 We've worked with some of the world's best actors ... and Warwick Davis!
Advertisement:

Single camera Sitcom starring Warwick Davis as a little person who has appeared in a number of recognizable franchises, runs a talent agency for short actors, and thanks to his astonishingly incompetent accountant, owes £250,000 in income tax. Written by Ricky Gervais and Stephen Merchant, the story revolves around Davis' attempts to earn money, his wacky encounters with other celebrities, and his persistent belief that people should recognize him on the street.