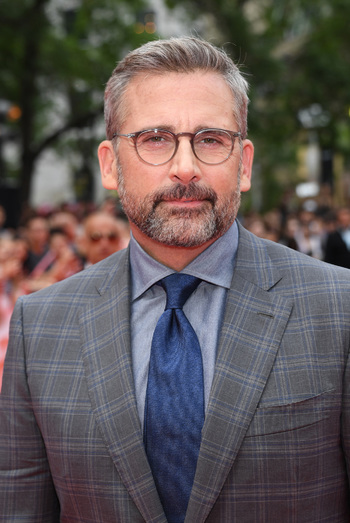 "I never had the preconceived notion, 'I will be a comedic actor.' I just thought, 'I'll go into acting and see what kind of work I can get."
Advertisement:

First coming to fame as a correspondent on The Daily Show with Jon Stewart (and like fellow correspondent Stephen Colbert a Second City veteran), he is perhaps most recognized for portraying the character of Michael Scott on The Office, the American adaptation of the British sitcom (for which he received a Golden Globe Award for best actor in a television comedy series). Since then, he's risen to prominence on the big screen, his first starring feature being The 40-Year-Old Virgin, wherein he portrayed the titular character, Andy Stitzer. However, he had minor film roles prior to that, such as Brick Tamland, the Channel 4 News team's moronic weatherman in Anchorman: The Legend of Ron Burgundy and Evan Baxter, the Small Name, Big Ego rival to Jim Carrey's Bruce Nolan in Bruce Almighty. He's since gone on to take on a variety of roles, proving equally adept in comedy and drama, and even showing that he can completely disappear into some truly dark and disturbed characters.

People tend to forget he's a pretty jam-up writer; he co-wrote The 40-Year-Old Virgin and also wrote the Season 2 finale of The Office ("Casino Night"), widely regarded as one of the best episodes of the series. On top of this, he and his wife Nancy created the TBS series Angie Tribeca and wrote the pilot episode.

May or may not actually be the former president of Iran.

Tropes associated with Steve Carell include: