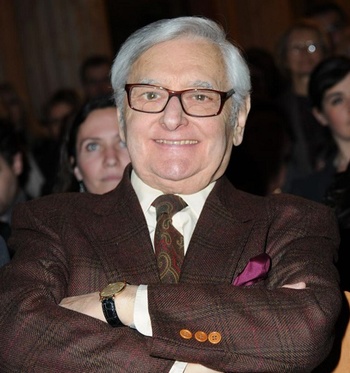 Roger Henri Élie Bancharel (August 14, 1927 - September 11, 2020), better known as Roger Carel, was a French voice, stage and screen actor whose career spanned from 1949 to 2014 and made him one of the quintessential French examples of Man of a Thousand Voices.

He started his acting career on stage in the 1940s, learning the trade with the likes of Michel Piccoli, Anouk Aimée and Jacques Ciron, then branched out with bit parts on film and regular supporting roles on television from the 1950s to the 1990s.

What made him stand out, however, is the impressive list of his voice acting parts, to the point of making him a national institution in the matter. He regularly dubbed the likes of Peter Sellers, Peter Ustinov, Jack Lemmon, David Suchet, Benny Hill and Jim Broadbent. The number of characters that he voiced in French is quite staggering and truly difficult to list, with the likes of Asterix, Fred Flintstone, Yogi Bear, Mickey Mouse, Scrooge McDuck, Winnie-the-Pooh (and Rabbit and Piglet), Jiminy Cricket, the Cheshire Cat, Kaa, Sir Hiss, Woody Woodpecker, Kermit the Frog, C-3PO, Mr. Miyagi, ALF, Horace Slughorn and Hercule Poirot among the most popular ones. Can't Un-Hear It very much applies for many generations of French viewers about hem.

Jean-Claude Donda, who can provide reasonably good imitations of Carel's voice, replaced him for the dub of C-3PO starting in the second half of Season 4 of Star Wars: The Clone Wars and for every new Star Wars appearance of the character since.

Carel retired in 2014 right after voicing Asterix one last time in The Mansions of the Gods — he hadn't voiced anything since 2010, but temporarily came back just to do that part after volunteering for it.