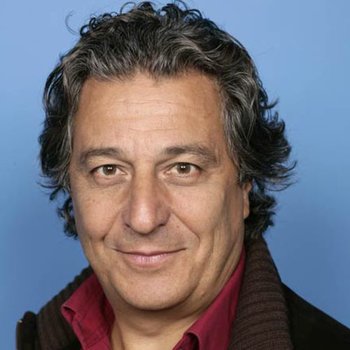 Christian Jean-Marie Clavier (born May 6, 1952 in Paris, France) is a French actor, screenwriter, producer and director.

He started his career with the Parisian comedic theater troupe Le Splendid', most famous for their smash hit stage play-turned-movie Le père Noël est une ordure (Santa Claus Is a Stinker) and the vacation comedy movies Les Bronzés (French Fried Vacation) and Les Bronzés font du ski (French Fried Vacation 2) in which Clavier played. All of these count among the most popular and quotable comedy films ever in France, enjoying widely watched reruns every year without any sign of stopping.

Much like Louis de Funès before him, the overwhelming majority of Clavier's movie roles are comedic, and often about nervous and obnoxious Butt Monkeys, and are usually huge national box office draws. His most famous roles outside the Splendid' films include time-travelling moronic medieval squire Jacquouille and his prickly 20th century descendant Jacquart in Les Visiteurs (he also wrote that trilogy) and Astérix the Gaul. He also often plays characters who are caricatures of the modern French upper class, either Nouveau Riches or Old Money.