Film / Santa Claus Is a Stinker 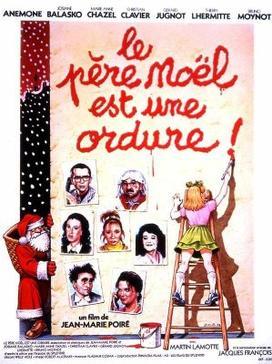 Santa Claus Is a Stinker (in French Le père Noël est une ordure) is a 1982 French comedy film directed by Jean-Marie Poiré and starring some of the Splendid' theatre troupe — Anémone, Josiane Balasko, Marie-Anne Chazel, Christian Clavier, Gérard Jugnot and Thierry Lhermitte. It is adapted from a 1979 play of the same name by that troupe, which also made the similarly slapstick French Fried Vacation films.

Pierre (Lhermitte) and Thérèse (Anémone) work as volunteers in a suicide crisis line. They have to spend Christmas Eve together in the office of the association. The night will go awry: the elevator will break up and quirky people will show up: Josette (Chazel), a homeless woman, her violent boyfriend Félix (Jugnot), a Bulgarian neighbor and a crossdresser (Clavier).

Santa Claus Is a Stinker provides examples of: