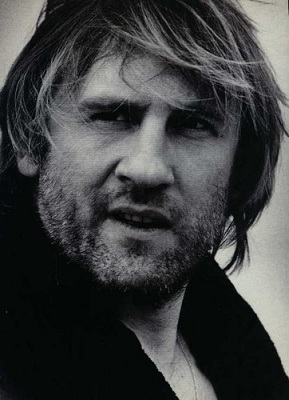 "I'm an actor. And it is, for me, an opportunity to meet people. One of the advantages of my profession is I come into contact with many people."
Advertisement:

Gérard Xavier Marcel Depardieu (born 27 December 1948 in Châteauroux) is one of the most prominent and prolific modern French actors since The '70s.

He first performed at the Parisian Café de la Gare, and got his major break (along with Patrick Dewaere and Miou-Miou, his comrade performers at the Café de la Gare) in 1974 with the film Les Valseuses. He's had around 250 acting credits since his debut in 1967.

Basically, he's been a go-to guy for leading roles in Period Pieces (either Historical Domain Characters or historical novel protagonists), as well as Big Fun, Big Eater and Boisterous Bruiser roles in French cinema — most often requiring to be a Large Ham, which he seems born to play. While most of his box office successes were comedies, the man's got range, as he garnered much critical acclaim for his dramatic roles in pictures such as The Last Metro, Cyrano de Bergerac or Mammuth. He's dabbled in English-language cinema, usually playing (of course) eccentric Frenchmen, starting with the romantic comedy Green Card.

He has also headlined several prestige Period Piece Mini Series on French television since the late 90s. His roles in these include Edmond Dantès in The Count of Monte Cristo (1998), Jean Valjean in Les Misérables (2000), Joseph Fouché in Napoléon (2002), Grigori Rasputin in Rasputin (2011) and Nostradamus in Diane de Poitiers (2022). Speaking of Rasputin, he's quite popular in Russia, he even officially became a Russian citizen in 2013, and was even offered to become Minister of Culture of an oblast in that country at one point (he politely declined).

Tropes in his films: