Film / Get Out Your Handkerchiefs 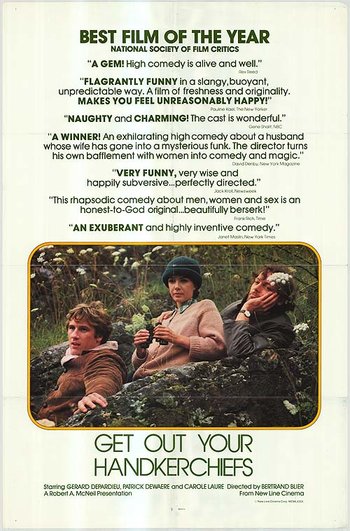 Get Out Your Handkerchiefs (Préparez vos mouchoirs) is a 1978 film from France directed by Bertrand Blier.

Raoul (Gérard Depardieu) and his wife Solange have a troubled marriage. Specifically, Solange seems to be stuck in some sort of depression that leaves her acting listless with a permanent Thousand-Yard Stare. At his wit's end, Raoul comes up with an odd idea: his wife needs a new lover. On the spur of the moment he approaches Stéphane (Patrick Dewaere), another customer in the restaurant they're eating at, who has been giving Solange the eye. Stéphane is willing, but the general weirdness of Raoul and Solange (when Solange isn't staring listlessly, she's usually fainting) leads him to beat a retreat.

The trio finds work as instructors at a summer camp for boys. Things take a turn when they intervene to help Christian, a genius-IQ thirteen-year-old boy who has been relentlessly bullied by the others. Christian gets interested in attractive Solange—and despite the fact that she's more than twice his age she gets interested in him.