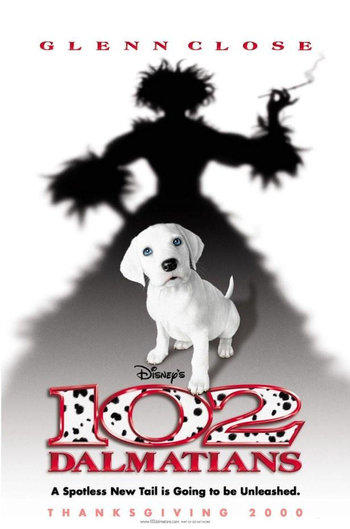 "No spots?!"
102 Dalmatians is the 2000 sequel to Disney's 1996 live-action adaptation of 101 Dalmatians. It was directed by Kevin Lima, with the screenplay by Kristen Buckley, Brian Regan, Bob Tzudiker and Noni White, and the story by Buckley and Regan. It was released on November 22, 2000. Only Glenn Close and Tim McInnerny reprised their roles as Cruella and her timid butler Alonzo from the original film.
Advertisement:

Cruella undergoes hypnotherapy to love puppies and hate fur coats and is released from jail to do community service for a struggling animal shelter, warned that if she ever repeats the offense, her entire fortune will go to the shelter. Unfortunately, Big Ben's chimes break the hypnosis and Cruella reverts back to her fur-loving puppy-hating self. Cruella makes an agreement with another animal skin coat lover from France named Le Pelt (Gérard Depardieu) to make the coat, planning to use 102 dalmatians this time (including a hood that would be made of the fur of Oddball, an albino dalmatian puppy who was born without a single spot).

The main human characters in this film are Chloe Simon (Alice Evans), a young probation officer who now owns Dipstick (one of the fifteen puppies from the first film) and is skeptical about giving Cruella another chance, and Kevin Shepard (Ioan Gruffudd), the owner of the dog shelter Cruella is assigned to help, who is so excited that his shelter is finally doing well to be the least bit suspicious of Cruella (which comes to bite him later in the film). This film invoked Polly Wants a Microphone to provide a talking animal character.

The movie got a video game release, 102 Dalmatians: Puppies to the Rescue, but it's loosely based on this movie. In fact, it features more elements from the original animated 1961 film than this.