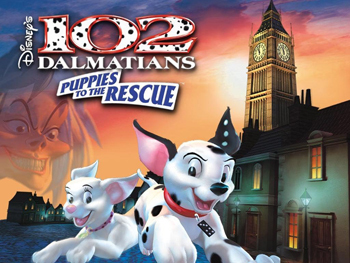 102 Dalmatians: Puppies to the Rescue are two video games based off of the 2000 sequel to Disney's 1996 live-action remake of 101 Dalmatians, but styled after the 1961 animated classic. There was one developed for the first PlayStation, Sega Dreamcast, and Windows by Toys For Bob (under Crystal Dynamics), and another for the Game Boy Color developed by Digital Eclipse.

While sitting through TV commercials, Oddball and Domino decide to go outside to dig up treasure. When they come back, all their brothers and sisters have gone missing. As it turns out, Cruella de Vil's toys are selling poorly because children prefer pets to them. Cruella has the dogs abducted with the plan to dip them into her Super-Gloop and sell them as toys.

The Dalmatian puppies' parents, Dipstick and Dottie, set off to Cruella's toy factory with the intention of getting their other puppies back. They urge Domino and Oddball to stay at home and be good, but as soon as they leave, the two pups agree to go and help rescue their family.

The PS1, Dreamcast and PC game provides examples of: