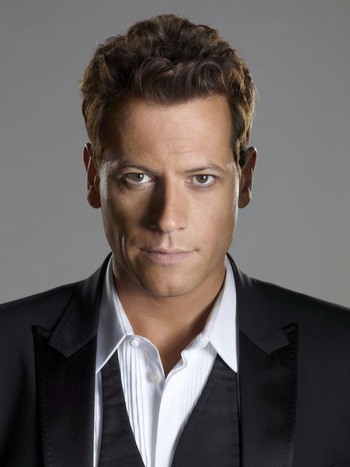 "Actors, to a certain extent, never grow up, you see. It's an extension of being out in the backyard with a stick, only you're being paid to do it. It's borderline madness."
Advertisement:

Ioan Gruffudd (pronounced Yo-wahn Griffith, born 6 October 1973 in Llwydcoed, Wales) is a Welsh actor who rose to fame through two very different roles: As the hero of Horatio Hornblower, the Series of the Books by C. S. Forester, and as Mr. Fantastic in the two Fantastic Four (2005) movies. Born in Cardiff in 1973, he started out as an actor in his native Britain but moved to the US a couple of years ago and has since appeared in a number of guest appearances on TV shows as well as in movies. He landed a starring role on the CW's Film Noir-style show Ringer which was unfortunately canceled after one season. Next, he played the main character in Forever, which was also, unfortunately, canceled after one season.

Oh, and his first language is Welsh. Just listen.