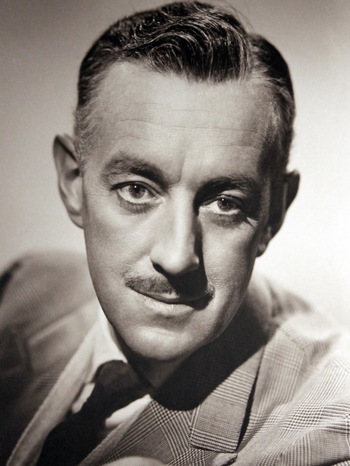 "Essentially, I'm a small-part actor who's been lucky enough to play leading roles for most of his life."
Advertisement:

Guinness was born out of wedlock in London to Agnes de Cuffe, a barmaid. The identity of his father has never been officially confirmed, although he believed a banker named Andrew Geddes who occasionally visited him to be his father. In his early twenties he started to appear on the London stage and soon became a well-known, highly-regarded Shakespearean actor. Guinness became a protégé of the legendary Shakespearean actor John Gielgud; Gielgud's entourage also included future stars Peggy Ashcroft, Jack Hawkins and Anthony Quayle.

Guinness had a prolific though somewhat erratic stage career. Starting in Shakespeare, he first played Hamlet in 1939 to general acclaim and won rave notices as the Fool to Laurence Olivier's King Lear in 1946. However, his second Hamlet (in 1951) was generally considered a disaster. His 1966 Macbeth, costarring Simone Signoret, proved an even bigger flop. Guinness fared better in modern plays like Hotel Paradiso, Bridget Boland's The Prisoner (both roles he reprised on film), Terence Rattigan's Ross (playing T. E. Lawrence) and Sidney Michaels' Dylan, as poet Dylan Thomas. The latter earned Guinness a Tony Award in 1964.

After serving in World War II, he transitioned to film, making his debut in David Lean's highly successful adaptation of Great Expectations. Two years later, he played Fagin in Lean's Oliver Twist. The start of Guinness's film career was also the start of a very productive partnership with Lean that included The Bridge on the River Kwai and Lawrence of Arabia. The two had an acrimonious relationship, which eventually led to a falling out while making A Passage to India.

Guinness became famous early in his career as the star of a series of black comedies made by Ealing Studios. Kind Hearts and Coronets involved the illegitimate descendant of a noble family killing all his relatives in order to inherit a dukedom; Guinness played not the murderer but all eight of the nobles who stood in the murderer's way. Two years later, he earned his first Oscar nomination for The Lavender Hill Mob, playing a meek bank clerk turned criminal. The Ladykillers (1955) features Guinness as the head of a band of bank robbers (this film was remade by The Coen Brothers with Tom Hanks playing the Guinness part). His partnership with Lean brought him an Academy Award for Best Actor as the Stiff Upper Lip Col. Nicholson in The Bridge on the River Kwai. In 1959 he was knighted.

That same year, Guinness also earned a nomination for Best Adapted Screenplay for writing The Horse's Mouth, in which he also starred as Mad Artist Gully Jimson. In 1960 he starred in Tunes of Glory, which he considered his best performance. His film appearances waned through the '60s as he focused on his stage career. Through the '70s Guinness played mostly character roles, including Jacob Marley in Scrooge, Charles I in Cromwell, the title character in Hitler: The Last Ten Days and the blind butler Jamesir Bensonmum in Murder by Death.

Guinness became known to a new generation of moviegoers when he played Obi-Wan Kenobi in the Star Wars original trilogy. Guinness famously hated his character, calling the films "childish banalities" and describing the production of the film as "hot, boring and indecisive". In his memoir, Guinness claimed that he talked George Lucas into killing Obi-Wan off because not only because it would make him stronger, but also because he "couldn't go on speaking those bloody awful, banal lines" (Lucas disputes this, claiming he made the decision and that Guinness didn't take it well). Despite this, his costars had nothing but good things to say about Guinness, with Mark Hamill remembering him as "the most wonderful epitome of an English gentleman.”note Hamill also noted that Guinness had a wonderful sense of humor - watch him tell a story about Sir Alec here

Guinness spoke highly of the finished movie, calling A New Hope "pretty staggering... as spectacle and technically brilliant." But any affection he had soon waned as he became identified almost exclusively with Obi-Wan Kenobi. In later years, Guinness recounted a story in which a little boy said he'd seen Star Wars over a hundred times, to which Guinness responded by asking the boy never to watch it again. In Guinness's telling, the boy went away crying; the boy himself recalls their meeting as much friendlier and Guinness's comment as more joking than his memoir implies, though it doubtless expresses Guinness's feelings towards the role. In later years he did not even bother to read his Star Wars fan mail. He didn't return the checks, however. Guinness was smart enough to negotiate a 2% share of Lucas's 20% share of the Star Wars profits. This made him very rich.

In later years, Guinness focused primarily on television. Most notably, played George Smiley in the 1979 miniseries of Tinker, Tailor, Soldier, Spy and its sequel, Smiley's People. Author John le Carré was reportedly so enamored of Guinness's performance that in later books, he based Smiley on Guinness. A big movie actor doing a miniseries was huge for its time and has led to many others following.

Guinness was married to actress and artist Merula Salaman from 1938 until his death. Their son, Matthew Guinness, also became an actor.

In his autobiography A Positively Final Appearance, Guinness noted that he was a fan of The Simpsons.

Alec Guinness works on this wiki:

Known for his role as Professor Marcus in The Ladykillers, and later as Obi-Wan Kenobi in Star Wars.

Known for his role as Professor Marcus in The Ladykillers, and later as Obi-Wan Kenobi in Star Wars.