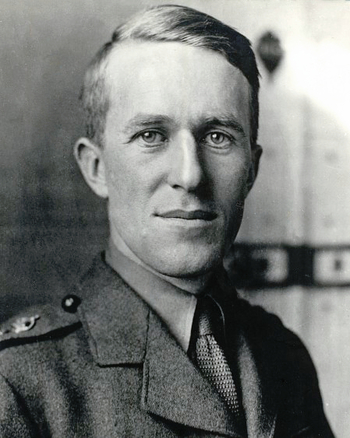 "All men dream: but not equally. Those who dream by night in the dusty recesses of their minds wake in the day to find that it was vanity: but the dreamers of the day are dangerous men, for they may act their dreams with open eyes, to make it possible. This I did."
Advertisement:

Thomas Edward Lawrence (1888-1935) was a British archaeologist, military officer, diplomat, and writer, most famous for his activities as "Lawrence of Arabia" in the Arab Revolt

during World War I. He also wrote two autobiographical books during the post-war years: Seven Pillars of Wisdom

, about the Arab Revolt itself, and The Mint

, about his life as an enlisted man in the Royal Air Force during the 1920s.

open/close all folders
Biography
T.E. Lawrence was the second of five illegitimate sons of Sir Thomas Chapman, an Anglo-Irish baronet, and Sarah Junner, a governess, who adopted the pseudonym of Lawrence when they began living together. The family moved around frequently during Lawrence's early childhood, before settling down in the city of Oxford in 1896. Lawrence, known as Ned to his family, was fascinated with archaeology and the Middle Ages and spent much of his adolescence exploring the city and its environs in search of anything of antiquarian interest. Lawrence read History at Oxford and wrote his thesis on Crusader castles, a subject that involved a lot of first-hand research in Europe and the Middle East.

In 1910, after graduation, Lawrence joined a British archaeological expedition at Carchemish, excavating the site of a ruined Hittite city near what is now the Syrian-Turkish border. As well as the archaeological achievements of the expedition, Lawrence gained a lot of useful experience with the local people and their language and culture that would prove essential in a few years.

Lawrence is most famous for his activities during the First World War. After the war broke out, Lawrence was stationed in Egypt working for the British Military Intelligence Department, where he became an expert on nationalist movements in the Arab provinces of the Ottoman Empire. In 1916, he was sent on a fact-finding mission to study Sherif Hussein of Mecca's rebellion against the Turks. This lead to a long-term role as a liaison officer with the Arab Revolt, serving with the forces led by Hussein's son Emir Feisal/Faisal (best known to western movie buffs for his portrayal by Alec Guinness in Lawrence of Arabia). He participated in, and lead, military activities against the Ottoman empire's forces (and their railway system), culminating in the capture of Damascus in 1918.

After Damascus, Lawrence hurried back to Britain, joined the Foreign Office, and switched from warfare to diplomacy and international politics. Working closely with Feisal, he advocated for Arab interests at the Paris Peace Conference, but these were sacrificed to imperialist ambitions and Britain's desire to maintain good relations with France (which had its own colonialist hopes in the Middle East). As an adviser to Winston Churchill in the Colonial Office, Lawrence presided over changes in British policy that put Prince Feisal on the throne of Iraq, established the Kingdom of the Trans-Jordan (modern-day Jordan), and gave both these regions a great deal more self-government. This helped assuage Lawrence's conscience regarding the political fate of his old Arab allies, which had been troubling him deeply.

During the war, Lawrence had encountered an American journalist named Lowell Thomas, who had visited the war in the Middle East in search of more interesting news than the frankly depressing Western Front provided. The Arab Revolt was much more picturesque and adventurous than the trenches of Europe, and after the war, Thomas incorporated his footage into a very successful multimedia edutainment event, which turned Lawrence from one leader in an obscure corner of a much larger war into a celebrity, "Lawrence of Arabia." At first, Lawrence welcomed the publicity as a possible source of greater public awareness and support for Arab independence, but later in life he would come to find fame much more troublesome than it was worth.

By 1922, Lawrence was not doing at all well in terms of mental health. He'd been leapfrogging from stressful situation to stressful situation since 1916, and his work on Seven Pillars of Wisdom kept the war fresh in his mind. In the first chapter of The Mint he portrays himself at that point as a borderline Nervous Wreck. (With There Are No Therapists having been in effect, it's impossible to know for sure, but untreated PTSD seems very plausible.) Lawrence quit the Colonial Office, and later that year enlisted in the Royal Air Force under an assumed name. If Lawrence had hoped to lead a quiet life away from the shadow of "Lawrence of Arabia," he was disappointed, because the press found out about his identity after less than a year and Lawrence was discharged. Lawrence joined the army Tank Corps under a different alias soon after, but he was not at all happy there and kept petitioning to be readmitted to the RAF. Lawrence got his way in 1925, and the more cheerful last section of The Mint was based on his experiences after his re-enlistment.

For a few years in the late 1920s, he was stationed in British India to keep him out of the way of the press, but he was sent back to Britain after rumors spread about what a former adviser-to-rebels stationed in such a politically sensitive area might be up to. (Lawrence had no such intentions: he didn't speak any Indian languages, he didn't know the local culture well, and by that point in his life he was sick of political intrigue.) During his later years in the RAF, Lawrence became interested in air-sea rescue and was deeply involved in the development of high-speed motorboats for water rescues. (While it doesn't often show up in media focused on the Arab Revolt, where there were more camels around than motor vehicles, Lawrence was rather a gearhead, and his love for acceleration was not limited to motorcycles.)

Lawrence left the RAF in March 1935, and died in May of the same year, a few days after sustaining a severe head injury in a motorcycle accident. (His death inspired Hugh Cairns, a neurologist who had attended him, to take a professional interest in motorcycle safety issues, which lead to the popularization of crash helmets.)

Lawrence was a complicated man, and his life and personality provide a notoriously fertile ground for Alternative Character Interpretation, both in fiction and in serious scholarship. Issues ranging from his childhood, to his Character Alignment, his sexuality, his attitude toward fame, his reliability as a narrator, the true cause of his death, and whether he deserved his Memetic Badass reputation have all attracted controversy. Combine this with the usual Artistic License of Historical Fiction, and you get someone who can, and has, been portrayed in many different ways; contrast the flamboyance of Peter O'Toole's Lawrence with the shyness of Ralph Fiennes's.

Fortunately for fans and amateur historians, Lawrence was an avid correspondent, and many of his letters have survived and been published, so researchers today have access to the primary sources from which they can form their own opinions of his personality.
Advertisement:
Tropes found in Lawrence's own works
"He saw life as a saga, and all events in it were significant, and all personages in contact with him heroic. His mind was stored with tales of old raids, and epic poems of fights. He had no control over his lips, and was therefore terrible to his own interest, and hurt his friends continually. He spoke of himself in the third person and was so sure of his fame that he loved to shout out stories against himself. At times he seemed taken by a demon of mischief: and yet with all this he was really modest, as simple as a child, direct, honest, kind-hearted, and warmly loved even by those to whom he was most embarrassing - his friends."
"She questioned me about the women of the tribe of Christians and their way of life, marvelling at my white skin, and the horrible blue eyes which looked, she said, like the sky shining through the eye-sockets of an empty skull."
"I had got among the first of them, and was shooting, with a pistol of course, for only an expert could use a rifle from such plunging beasts; when suddenly my camel tripped and went down emptily upon her face, as though pole-axed. I was torn completely from the saddle, sailed grandly through the air for a great distance, and landed with a crash which seemed to drive all the power and feeling out of me. I lay there, passively waiting for the Turks to kill me, continuing to hum over the verses of a half-forgotten poem, whose rhythm something, perhaps the prolonged stride of the camel, had brought back to my memory as we leaped down the hill-side: For Lord I was free of all Thy flowers, but I chose the world’s sad roses, And that is why my feet are torn and mine eyes are blind with sweat. While another part of my mind thought what a squashed thing I should look when all that cataract of men and camels had poured over. After a long time I finished my poem, and no Turks came, and no camel trod on me: a curtain seemed taken from my ears: there was a great noise in front. I sat up and saw the battle over, and our men driving together and cutting down the last remnants of the enemy. My camel’s body had lain behind me like a rock and divided the charge into two streams: and in the back of its skull was the heavy bullet of the fifth shot I fired."
"The mixed natures in him made of his face and body powerful pleadings, carnal, perhaps, except in so far as they were transfused by character. No one could see him without the desire to see him again; especially when he smiled, as he did rarely, with both mouth and eyes at once. His beauty was a conscious weapon. He dressed spotlessly, all in black or all in white; and he studied gesture."
Feisal had planned to raise his father’s crimson banner as soon as he arrived in Medina, and so to take the Turks unawares; and here he was going to be saddled with two uninvited guests to whom, by the Arab law of hospitality, he could do no harm, and who would probably delay his action so long that the whole secret of the revolt would be in jeopardy!
"Hullo, what the hell's those marks? Punishment?' 'No Sir, more like persuasion Sir, I think.'"
Tropes as portrayed in fiction
Appearances in fiction
Theatre
Film
Television
Video games
Comics
Music