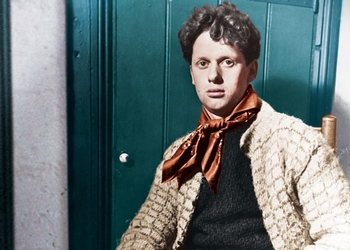 "In my craft or sullen art/Exercised in the still night/When only the moon rages/And the lovers lie abed/With all their griefs in their arms, I labour by singing light..."
Oh as I was young and easy in the mercy of his means,
Time held me green and dying
Though I sang in my chains like the sea.
Advertisement:

Dylan Marlais Thomas (27 October 1914 – 9 November 1953) was a Welsh poet. His poetry is notable for its tendency towards obscurity, its gothic, surreal tone and its rhythmic, infectious cadence. His most famous poem is the Trope Namer for Do Not Go Gentle.

His books available today include...

His work gives examples of the following tropes...

Rage, rage against the dying of the light.