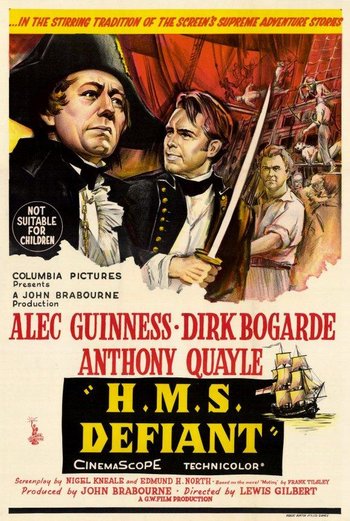 H.M.S. Defiant is a 1962 British naval war film directed by Lewis Gilbert, starring Alec Guinness, Dirk Bogarde, and Anthony Quayle. It was also released as Damn the Defiant! in the United States.

In 1797, the humane Captain Crawford (Guinness) is in command of the warship HMS Defiant during the French Revolutionary Wars. He soon finds himself in a battle of wills with his first officer, the sadistic and arrogant first lieutenant, Scott-Padget (Bogarde). The lieutenant believes that Crawford is too soft on his crew, and Crawford, knowing that Scott-Padget has powerful family connections, is helpless to intervene. Meanwhile, some of the crew, led by seaman Vizard (Quayle), are preparing to mutiny for better conditions.