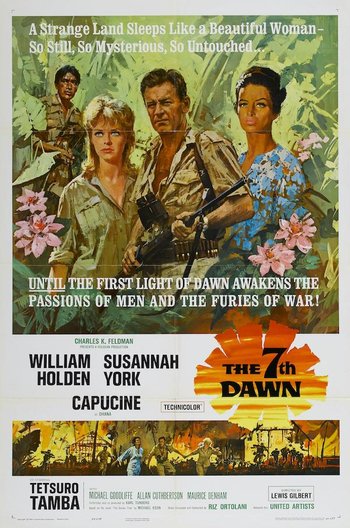 The 7th Dawn is a 1964 drama film directed by Lewis Gilbert and starring William Holden, Susannah York, Capucine and Tetsurō Tamba. It was based on the 1960 novel The Durian Tree by Michael Keon.

Set during the Malayan Emergency in the early '50s, the film is about three friends who fought the Japanese in Malaysia during World War II but end up on opposing sides in the Communist insurgency following the war. Ferris (Holden) becomes a prosperous rubber plantation owner with his mistress Dhana (Capucine), while the third, former guerrilla Ng (Tamba), goes to Moscow to obtain an education, and returns an even more committed revolutionary than during the war.

Ferris's friendship with Ng makes him and his holdings immune from attack, and he tries to steer clear of the conflict, but he is inexorably drawn in when Dhana is arrested and sentenced to death for carrying explosives for the insurgents. As an additional complication, Candace Trumpey (York), the daughter of the British Resident whom Ferris had met at the end of the war, offers herself as a hostage and falls into Ng's hands; he threatens to kill her if the sentence on Dhana is carried out. Ferris offers to give Ng a safe passage out in exchange for Dhana's life, but he is given only seven days to do so.