Film / Hell Is for Heroes 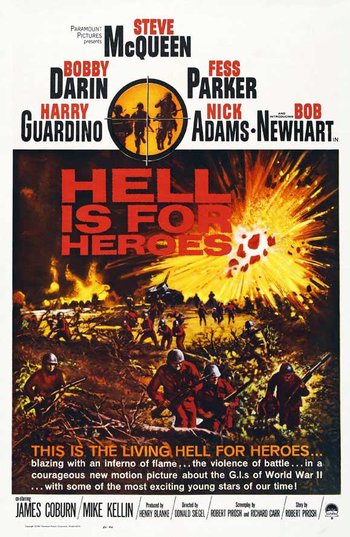 Hell Is for Heroes is a 1962 World War II film directed by Don Siegel and co-written by Robert Pirosh. It was Siegel's only war film, and unfortunately his only collaboration with Steve McQueen, an actor whose rebellious persona jibed well with the director's vision; it puts the star in the familiar role of antihero. Also in the cast are Bobby Darin, Fess Parker, Harry Guardino, Nick Adams, James Coburn, and Bob Newhart. Pirosh, who also wrote Battleground (1949), would go on to write much of the series Combat!, which is stylistically similar to this film.

1944: John Reese (McQueen) is an embittered G.I. who has just been sent back to join his war-weary infantry unit holding down a position opposite a pillbox on the Siegfried Line in France. Recently demoted back to private from staff sergeant for drinking, Reese chafes under all authority, and is a pariah to his fellow grunts despite their awareness of his extraordinary courage in battle. A natural leader, he persuades his squad leader to implement a plan he's formulated to keep the Germans at bay by making them believe that the small outfit is larger than it is. While this is temporarily effective, Reese knows it's only a matter of time before the enemy discovers the truth, and takes it on his own authority to lead an attack on the well-defended pillbox, although his unit has been assigned only to hold their ground.

Hell is for Heroes provides examples of the following: