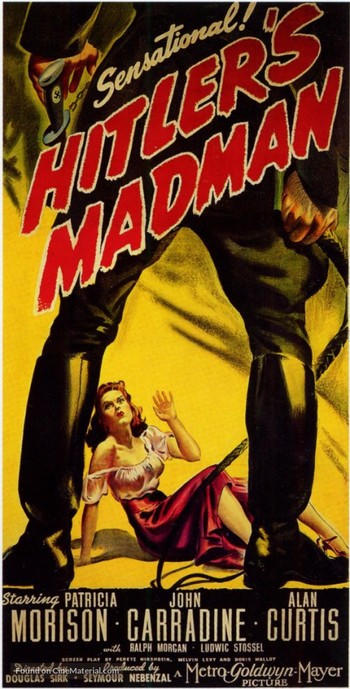 Hitler's Madman is a 1943 film directed by Douglas Sirk. It is a dramatization of the events surrounding the Real Life assassination

of Reinhard Heydrich in Prague, Czechoslovakia in 1942, and the retaliatory massacre of the entire village of Lidice, which cost 1300 lives. It stars John Carradine as Heydrich.

Karel Vavra is a Czech resistance agent parachuted into the Czech countryside near his hometown of Lidice. His calls to the people of the town to engage in active resistance against the German occupiers fails. Jan Hanka, one of the more prominent residents of Lidice, successfully prevails on his fellow townsfolk to avoid resistance, which will likely draw violent German reprisals. His daughter Jarmilla loves Karel and agrees to help him, but no one else does.

Nazis don't play well with others, though, and SS Obergruppenführer and Protector of Bohemia and Moravia (in what is nowadays The Czech Republic), Reinhard Heydrich, winds up spurring the people of Lidice to resist. Among the crimes committed by Heydrich are randomly executing a Lidice villager for no reason, snatching up the prettiest young women of Lidice to serve as sex slaves in Eastern Front brothels, and shooting the town priest for unknowingly blocking Heydrich's car with a religious procession. Hanka, who now sees that he was wrong to think that any co-existence could be had with the Nazis, resolves to murder Heydrich.

Hitler's Madman was the first film Sirk, who was German, directed in the United States after escaping Nazi Germany to the West in 1938. It was a B-Movie shot super-cheap over just seven days. Sirk had actually met Reinhard Heydrich at a party in Germany, and was able to give Carradine advice on how to play the part.

It was produced by "Poverty Row" studio PRC, but when word got out about how much better it was than PRC's typical cheapo fare, it was snapped up by Metro-Goldwyn-Mayer, marking the first time that MGM ever bought an independent production. MGM starlet Ava Gardner, then three years away from her Star-Making Role in The Killers, has a non-speaking bit part as a Czech villager.