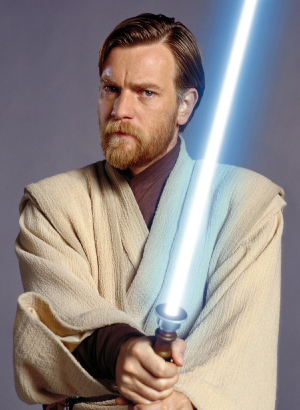 "It takes strength to resist the dark side. Only the weak embrace it."
Click here 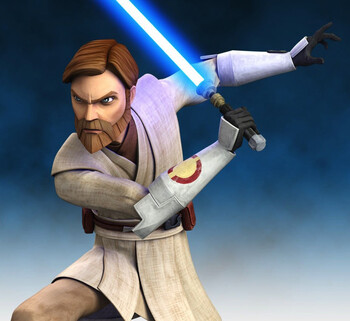 to see his The Clone Wars appearance

"Sith Lords are our specialty."

Obi-Wan Kenobi was originally the Padawan learner of maverick Jedi Master Qui-Gon Jinn. After a fateful mission to Naboo to end a blockade enforced by the Trade Federation, Obi-Wan lost his master to the Sith Lord Darth Maul, but gained his own Padawan learner in a Force-sensitive human from Tatooine named Anakin Skywalker. Ten years later, the two were reunited with Naboo senator Padmé Amidala while protecting her from assassins during the Separatist crisis, which erupted into the Clone Wars. During the war, Obi-Wan became one of the leading Jedi generals of the Republic army in addition to being raised to the rank of Jedi Master and granted a seat on the Jedi Council while Anakin became a Jedi Knight and trained a Padawan learner of his own named Ahsoka Tano. At the end of the war, he was one of the few surviving Jedi and went into hiding from the Galactic Empire on Tatooine as a secret guardian of Luke Skywalker, one of the twin children of Anakin, who then served the Emperor as Darth Vader.

Tropes from the Republic Era 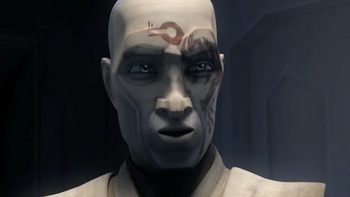 At some point late in the Clone Wars, Obi-Wan faked his death and then took on the alias of the man who "killed" him, Rako Hardeen, to infiltrate a Separatist conspiracy. This alias included imitating his appearance and voice and acting like a typical bounty hunter.

Note: This section is for the Rako Hardeen Obi-Wan played as during his undercover operation. For tropes applying to the real Rako Hardeen, click here. 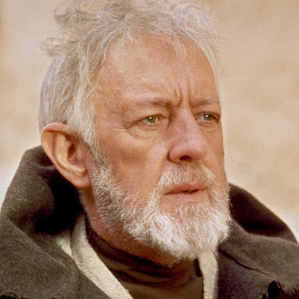 "Who's the more foolish? The fool, or the fool who follows him?"

"The Force will be with you, always."

Nine years after his last encounter with Darth Vader, Obi-Wan continued to watch over and protect Luke Skywalker on Tatooine, while dealing with any threats that came to the planet, including a vengeance seeking Darth Maul. After the arrival of R2-D2 and C-3PO, Obi-Wan rescued Luke from a group of Tusken Raiders and revealed to him his heritage while hiding key facts about Anakin's true fate. Departing to join the Rebellion with Luke, Obi-Wan instead discovered Alderaan destroyed and confronted Vader once more on the Death Star, where he allowed himself to fall to his former apprentice's lightsaber. Upon his death, Obi-Wan became one with the Force and continued to advise Luke as a Force spirit in his battle against the Empire and training as a Jedi, leading him to Master Yoda for the latter.

Tropes from the Rebellion Era 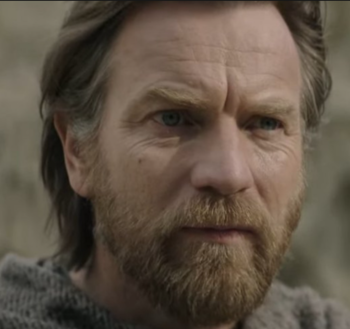 "The light will fade, but it is never forgotten."

"Only when the eyes are closed can you truly see."

Ten years after the end of the Clone Wars, Obi-Wan retreated to the planet of Tatooine to hide from the Galactic Empire as well as watch over young Luke Skywalker and his adoptive family, adopting the guise of a desert hermit known as "Ben". But as he's coping with past trauma, he's called into action by Bail Organa to rescue his adoptive daughter. Obi-Wan sets out to find her, all the while trying to evade the Inquisitors, who are after former Jedi.
Feedback