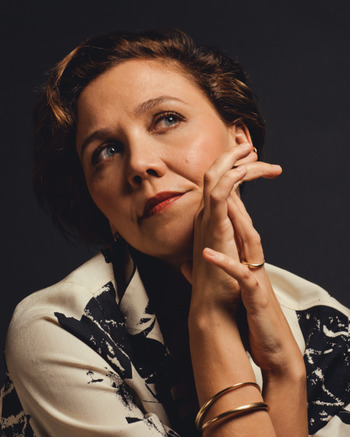 "When you are in every scene of a movie - which I must say I really much prefer - you have more control over the film that you're making. Because the choices you make as an actor can't help but change what the movie is saying."
Advertisement:

She's best known for her performances in Secretary, The Dark Knight, Stranger Than Fiction, Cecil B. Demented, and for playing sister to her real life brother, Jake, in Donnie Darko. She has one Oscar nomination, for Best Supporting Actress for Crazy Heart. She made her directing debut in 2021 with The Lost Daughter.

She married Peter Sarsgaard in 2009. Incidentally, she's technically a member of the Swedish nobility (the Gyllenhaals date back to 1652).

This actress' work provides examples of: