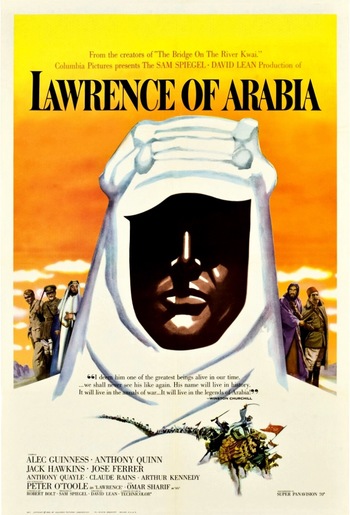 Jackson Bentley: What is it, Major Lawrence, that attracts you personally to the desert?
T.E. Lawrence: It's clean.
Advertisement:

Producer Sam Spiegel purchased the rights to Lawrence's own 1922 account of his experiences in the Middle East, The Seven Pillars of Wisdom, for Lean (who'd previously helmed the Spiegel-produced The Bridge on the River Kwai to great success) to direct. Lawrence took two years to make, shooting in locations like Jordan, Morocco and Spain. When finally released, it won a ton of awards including the Academy Award for Best Picture, and remains highly-regarded by most critics decades later. The movie is intelligently written and well-acted, although some critics have issues with the historical accuracy. On a visual note, it contains some absolutely beautiful desert scenery, and Peter O'Toole is terribly pretty in the title role.

The film was twice subjected to major cuts, being reduced from its initial 222-minute length down to 187 minutes by the early '70s. Much of the missing footage was misplaced by Columbia Pictures until the 1989 restoration (216 minutes). David Lean approved of the first round of cuts, but later blamed them on Sam Spiegel. In 2012, the film was given a limited theatrical re-release both to celebrate its 50th anniversary and to show off a new screen technology known as Ultra-High Definition resolution.

Famously one of the all-time favorite films of Steven Spielberg, who has cited the legendary Match Cut as being one of the seminal inspirations for him taking up filmmaking as a career. He eagerly spearheaded a restoration of the film for DVD, with the assistance of Martin Scorsese.

Premiere magazine ranked O'Toole's performance as the title character as the greatest in film history.