Film / The Legend of Tarzan 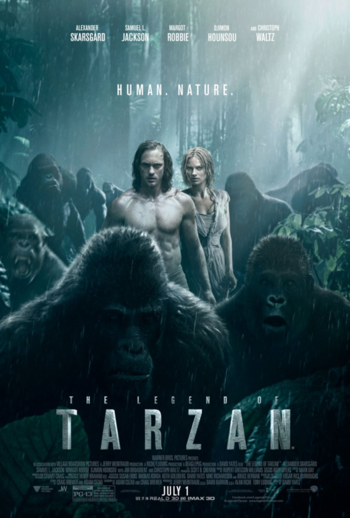 "He's Tarzan, you're Jane. He'll come for you."
Advertisement:

The Legend of Tarzan is a film in the Tarzan franchise created by Edgar Rice Burroughs, directed by David Yates. Produced by Warner Bros., it was released in July 2016. It stars Alexander Skarsgård as Tarzan and Margot Robbie as Jane. The cast also includes Samuel L. Jackson, Christoph Waltz, Djimon Hounsou, and Jim Broadbent.

Eight years have passed since Tarzan, the man raised by apes, left the African jungle for his ancestral home England. He has since married his discoverer Jane Porter and adopted his birth name and hereditary title: John Clayton, Lord Greystoke. Now he has been sent back to Africa on a mission for the British Parliament, unaware that he is a pawn in a larger conspiracy. When evil forces endanger his old home and those he loves, he becomes the legendary Lord of the Jungle again.

Shares its name with an animated TV series, a Spin-Off of the 1999 Disney film.

The Legend of Tarzan provides examples of: