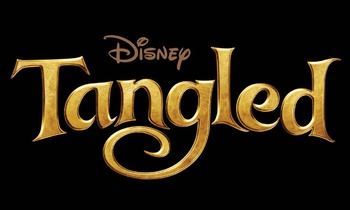 Tangled is a Disney cartoon franchise based on Rapunzel, that started with the successful film of the same name and spawned various spin-offs and adaptations.

The 2010 movie introduced the princess named Rapunzel, who is born with magical powers and kidnapped as a baby by an old lady named Gothel. Rapunzel is kept locked away in a tower by Gothel for the first 18 years of her life. Then she meets a thief named Flynn Rider and they end up falling in love.

The 2012 short film named Tangled Ever After showed the wedding of Rapunzel and Flynn.

In 2017 a TV film, Tangled: Before Ever After, came out, which was set in between the film and Before Ever After. It was followed up by the TV series Tangled: The Series, which in its second season was renamed to Rapunzel's Tangled Adventure.

Tropes throughout the franchise (and works without pages yet):