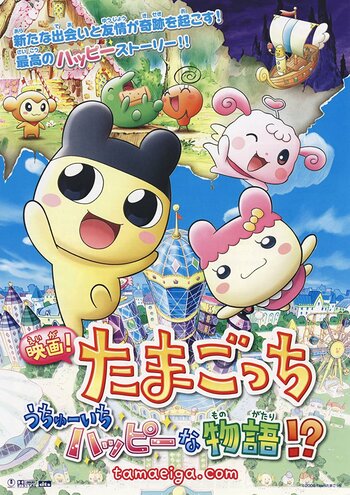 Tamagotchi: Happiest Story in the Universe! is a 2008 Japanese animated film based on Tamagotchi, and the sequel to Tamagotchi: The Movie.

Mametchi and his friends spend their time traveling into storybooks at the library. They come across a book called "The World's Happiest Story", which is about a character named Happy who is trying to get, well, happy, and eventually it's revealed that a page is missing from the book. Their friend Kikitchi jumps into the book, which is enough to affect Tamagotchi Planet as well as the world in the story, forcing Mametchi and friends to save the day.

Cartoon Network aired an English dub in the Philippines.

Succeeded by Tamagotchi, the 2009 television anime.