Recap / Tangled: The Series "Before Ever After" 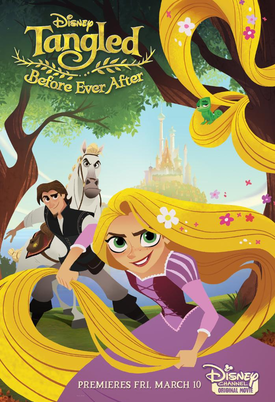 Before the Happy Ending, there was more hair-raising adventure to be done!
I'm just going to go ahead and say your hair magically grew back, I'm not gonna ask how, obviously you don't want to tell me or else you wouldn't have tried to hide it from me so I won't ask how it grew back but tell me please how did it grow back!?
— Eugene, to Rapunzel
Advertisement:

Rapunzel grapples with the responsibilities of being a princess and the overprotective ways of her father. While she wholeheartedly loves Eugene, Rapunzel does not share his immediate desire to get married and settle down within the castle walls. Determined to live life on her own terms, she and her tough-as-nails lady-in-waiting Cassandra embark on a secret adventure where they encounter mystical rocks that magically cause Rapunzel's long blonde hair to grow back. Impossible to break and difficult to hide, Rapunzel must learn to embrace her hair and all that it represents.