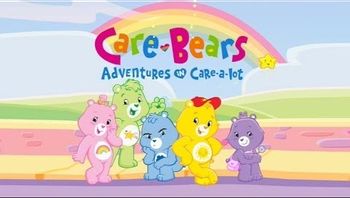 The caring never stops, you've got a friend in Care-A-Lot!

Care Bears: Adventures in Care-a-Lot is an animated series based on the Care Bears franchise that was produced by Sabella Dern Entertainment and distributed in the US by DiC Entertainment, and is in fact one of the last series to involve the company shortly before it was acquired by Cookie Jar.

The show centers around Cheer Bear, Share Bear, Funshine Bear, Grumpy Bear and Canon Foreigner Oopsy Bear (first introduced in the movie Oopsy Does It!). No Care Bears show is complete without a villain of course, and the villain of this incarnation is Grizzle, a puny grizzly bear who spends most of his time in a robot suit and seeks to convert Care-a-Lot into part of his machine empire. It's a lot less scary than it sounds, owing to the fact that Care Bears incarnations of the new millennium have been toned down as to not give younger audiences nightmares. As a matter of fact, Grizzle is an ineffectual villain at most, with most of his plans hilariously backfiring on him one way or another, and in the final special of the series, Grizzle was removed altogether.

The full series franchise for this incarnation consists of the movie Oopsy Does It!, 24 episodes and two TV specials split across two seasons, and three more direct-to-video specials before the franchise was unceremoniously revamped.

It can be said that the franchise was ill-timed. Shortly after the release of the series, Hasbro acquired the master license to both Care Bears and Strawberry Shortcake from both Play Along Toys and Playmates respectively. Hasbro then proceeded to sit on the franchise until 2012, when they launched another revamp in Care Bears: Welcome to Care-a-Lot.

This page focuses on the TV specials and the TV series. The direct-to-video specials and Oopsy Does It! should be placed in their own pages.