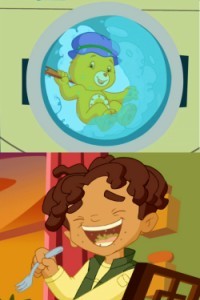 Probably about the only time doing this has ever made sense.
Why are you watching
The washing machine?
I love entertainment
So long as it's clean.
— UNIX fortune file

It's time to do laundry again. T-shirts, pants, socks, small children, underwear... Yup, Bob tosses the usual hamper all in to clean. And while the rinse cycle goes on, it's time to... Sit down and watch it. Why? Maybe Bob is a Cloudcuckoolander or even The Ditz. Maybe he sees something shiny or important swirling around inside. Maybe he's just bored. Regardless, Bob decides it's worth his time to watch the washing machine do its job.

This is a fairly Discredited Trope but can still occasionally be seen at laundromats in Real Life. On the other hand, it's a bit of a Coconut Effect in the way that clear-front washing machines are not very common in laundromats as they are usually much newer (and why would a laundromat owner upgrade when their '80s/'90s machines work fine?).

Seen in the Baby Einstein video Baby Neptune when the duck ends up watching the washing machine. Due to becoming dizzy, he ends up fainting.

Seen in the Baby Einstein video Baby Neptune when the duck ends up watching the washing machine. Due to becoming dizzy, he ends up fainting.