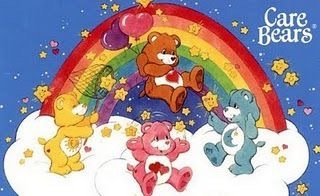 The first TV show in the Care Bears franchise. Some sources list this show as The Care Bears while the VHS and DVD releases after 2002 use Care Bears on the box/case. The Nelvana seasons also aired under the name The Care Bears Family.
Advertisement:

Here we are introduced to Care-a-Lot, the cloud-and-rainbows home of the Care Bears, where they can watch Earth for children who need help caring. The show is technically two different and legally unrelated series by DIC Entertainment (TV specials and first season) and Nelvana (later ones). The DIC episodes' main villain is Professor Coldheart, the Mad Scientist who wants to freeze everyone's feelings, while the Nelvana ones have No Heart, an Evil Sorcerer who intends to destroy Care-a-Lot and rid the world of caring. No Heart's allies are his bratty niece Shreeky, and their underling Beastly. Whatever the villains do, The Good Guys Always Win.

The show began with two TV specials,The Care Bears in the Land Without Feelings (1983) and The Care Bears Battle the Freeze Machine (1984). There are four regular seasons, from 1985 to 1988. During the 1990s, the Disney Channel (in the USA) sometimes aired reruns of Care Bears alongside Gummi Bears. The Nelvana episodes aired in Canada on the Global Television Network (ATV (now CTV Atlantic) and ASN (now CTV Two Atlantic) in Atlantic Canada, due to no affiliate of Global Television existing in that part of the country when the show debuted). After the toy relaunch in 2002, some plush bears included VHS (and later DVD) episodes from this show.

The show is not Strictly Formula, but there are a few recurring episode formats:

The four movies of this era have their own pages:

The 1980s cartoon contains examples of:

Lotsa Heart and the Alien

Lotsa Heart discovers an alien and is not happy about it.

Lotsa Heart and the Alien

Lotsa Heart discovers an alien and is not happy about it.