Western Animation / Care Bears in the Land Without Feelings 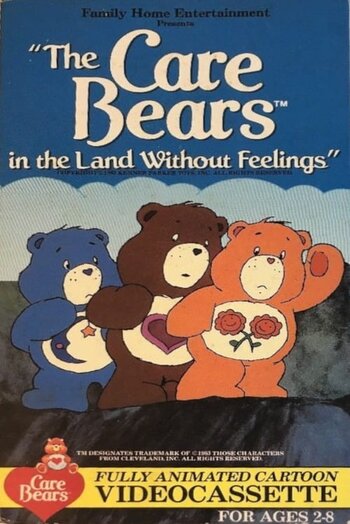 Donna: I was told about a beautiful place that was turned cold and ugly by a mean man. It was called the Land Without Feelings.
Tenderheart: That's here, all right...
Advertisement:

The 1983 animated special by Atkinson Film-Arts that introduced the Care Bears from American Greetings cards and Kenner's toy line to television. With a rather darker and more disturbing tone than its successors, its only resemblance to any other installment in the Care Bears franchise are the characters and the same animation style as the studio's second special, The Care Bears Battle The Freeze Machine.

The story centers around a young boy named Kevin who is so mad about his parents deciding to move that he runs away from home. Ten of the Care Bears go to Earth to help his best friend Donna find him. Unfortunately, the path he takes through an abandoned park happens to lead him to the Land Without Feelings, the domain of the franchise's first villain and one of the Care Bears' most memorable future nemeses, Professor Coldheart, whose modus operandi at this time is to kidnap any children who enter his realm and transform them into mute, reptilian-like creatures whom he keeps as slaves. Once he realizes a group of "little friendly fuzzies with things on their tummies" are after him, he sets off numerous traps on the trail through the Land to stop them. Cue Deus ex Machina, followed by the Care-Bear Stare and a We Will Meet Again, and everyone lives Happily Ever After (which you should have guessed already).

The Care Bears use their stare to free the kids from Professor Coldheart's spell.

The Care Bears use their stare to free the kids from Professor Coldheart's spell.