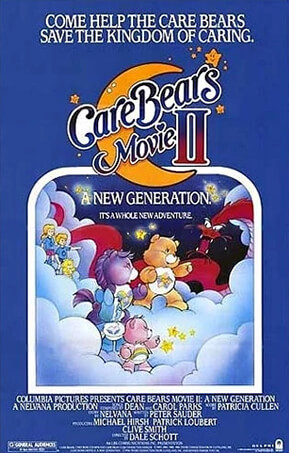 Stickin' together we can make it!
Nothing can stop us, we can't go wrong!
We can be tough, yes, we can take it!
We care a lot and we will be strong
Advertisement:

This film has a different continuity than the first movie and the specials. The Care Bears and Care Bears Cousins grew up together, but were pursued as children by a malevolent entity known as Dark Heart. He later finds a young, ambitious, and very bitter girl named Christy, and he promises to fulfill her wishes in return for help if he should ever ask. He then gets frustrated in pursuit of the Care Bears, but then uses Christy to have her pretend to need help from the Care Bears so that he can capture them. Eventually, John and Dawn, Christy's two best friends who have been helping the Care Bears, talk Christy into joining them to stop Dark Heart, even if it costs them their lives.note This part is only really implied, though. Don't forget what we're watching here.

A song about growing up...all while the Care Bears and Cousins are growing up.

A song about growing up...all while the Care Bears and Cousins are growing up.